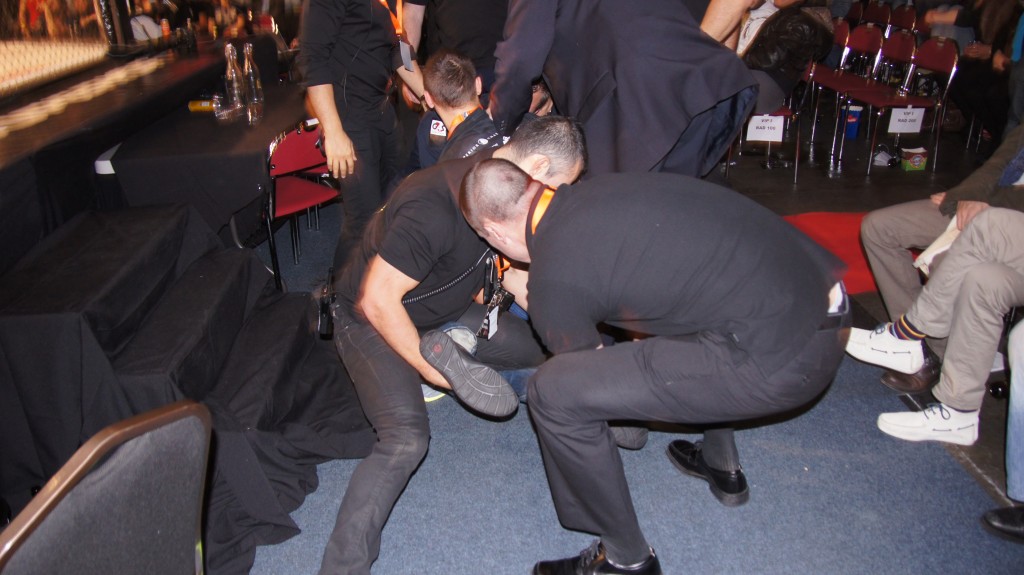 When Malmös own Martin Akhtar was on the catwalk preparing to enter the ring to face his opponent Leandro Gontijo from Spain, a man from the audience climbed over the cage wall and entered the cage. The man was clearly intoxicated (most likely from alcohol) and wasn’t wearing a shirt. Once inside the man started yelling and sort of challenging both Gontijo and referee Grant Waterman both with his body language and also verbally. Security staff entered the cage to try apprehend the man, the 33-year-old who resisted violently. It took 5-6 security guards to get the man out of the cage and handcuffed. The man was resisting so much that he broke the door to the cage in all the commotion causing a 20 minute break to the show so that a member of the event staff could weld the door back in place. Big props to Superior Challenge for being able to take care of that issue so  fast and effecient.

Today the newspaper Sydsvenskan reported that the man causing the commtion has been prosecuted for attempted assault and vandalism. The 33-year-old came out of the tussle relatively unharmed considering he stepped in to a cage with two fighters, had he laid hands on either Gontijo or Waterman his night could’ve ended differently.
http://www.youtube.com/watch?v=BJ9l8wHVtIs