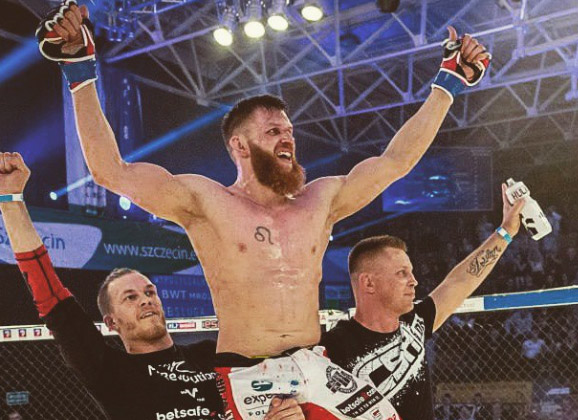 Emil Weber Meek told MMAViking.com shortly after the bout that he thought the actions at his most recent bout at the Arena Berserkerów 7 were “bullshit”. And now an independent team of judges agree.

Coach Carsten Ettrup who filed a protest shortly after the bout, posted:

“And it’s now official. Advised by opinions of three independent UFC and Cage Warriors referees, Marc Goddard, Leon Roberts and Rich Mitchell, decided to revoke the result of Arena Berserkerów 7 bout between Emil Weber Meek and Piotr Danelski and make it a no contest! ALL three referees said that in actual time it was a TKO stoppage!”

“Due to a series of major referee errors Berserksers Arena decided to change the result of the bout to a no contest and will make everything in its power to schedule a rematch for the next event.” – Protest Response

“He lost his moth piece got rocked, and then they stop the fight, and gives him 1 minute to recover. I would have tko’ed him right then and there.” says Meek, who saw an independent body agree with his assessment. This was the focus of the protest filed by Ettrup as he focused on the argument “We believe there has been an obvious mistake in the 3 round! 3:24 into round 3 you see Emil Meek TKO when Piotr Danelski stopped defending intelligently, Piotr was trying to catch a break from Emil’s punches to avoid the KO by deliberate spitting out his mouthpiece, but a referee can NOT stop action in the middle of an attacking opponent due to the mouthpiece is spit out!! Winner Emil by TKO! 3 round 3:24.”

Meek is currently in Las Vegas trying out for the season 22 of The Ultimate Fighter. The Norwegian fighter moves to 5 wins, 1 loss, and 1 no contest.