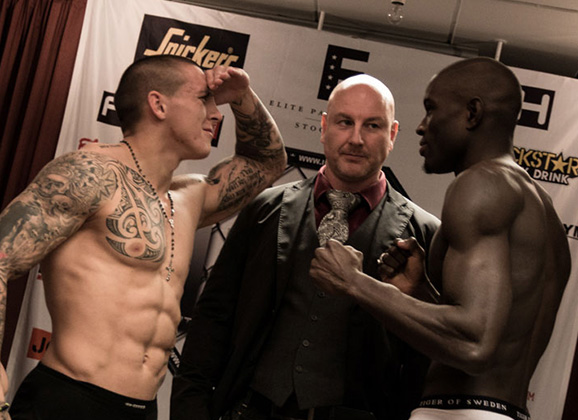 MMAViking.com is live in Stockholm for International Ring Fight Arena 7. There is a six fight pro card at the Solnahallen Arena. Check out live results below.

The capacity at the gymnasium is about 2,000 people, and besides sections of seats in the sides at the corner.  Good crowd, with the floor seats all sold.

“Welcome to the house of pain” yells the announcer.

We will have a photo gallery after the fight, so come back tomorrow.

Round 1
Okonski comes out looking for bombs.  Alacabek is moving in and pushes the Polish fighter against the cage and shoots for a double leg take-down.  Okonski looks for a guillotine, but the wrestler picks him up high and slams Okonski to the ground.  HUGE take-down and the crowd goes nuts.  The swede moves to the side and now full mount, punching down.  Alacabek now takes back and control.  Looking for punches under and over the hands of  the Pole covering up.  Alacabek a little high and the fight goes back to the feet.  One point deducted as Okonski holds the fence while Alacabek holds the fence avoiding another take-down.  The fight remains on the feet, and Alacabek looks to be a little tired as he lunges for a take-down.

Round 2
The two power punchers look to connect, but it is the Swede first that lands a hook sending the opponents mouthpiece to the ground. In the clinch, it is hooks from Okonski and left knees to the body from Hardem. Okonski is headhunting and lands some nice punches to the head of Hardem, but is the knees to the body that nullify the bout. More left knees and now a one-two combination. Okonski now turns the tide as he moves forward with power punches, but a HUGE left knee to the face and Okonski is hurt. Alacebk snaps him to the ground, and looks to finish here as he takes back and Okonski head down facing the ground. Punches and more punches, and this will be over in time. But Okonski is able to make his way to his feet, and there is more fight left. Alacabek doesn’t want any more slug fest in the middle, so he takes it back down to the ground and now landing heavy punches standing above the Pole. Good shots as his corner urges him on and now, the visiting opponent rolls over and now Hardem puts the nails in the coffin. Big left hands and more left hands and this one is over! Big win for the local fighter. HARDEM, HARDEM, HARDEM, HARDEM the crowd chants.

Alacabek wins by TKO in round 2

NOTE – The cage was damaged a bit in the last bout, and there will be a 15 minute break.

Oliver Enkamp (Sweden) vs. Lukasz Bienek (Poland)
Round 1
Bienek shoots for take-down, but Enkamp is quick to defend it. The Swede is able to neutralize the position and the two tie-up against the cage. Enkamp looking for a single against the fence, but Bienek straightens up and eventually the fight is broken up. Good combination from Enkamp, and he gets a takedown. The Swede on top and looking for damage. In full guard, as the Polish fighter tries to keep him close and avoid damage. 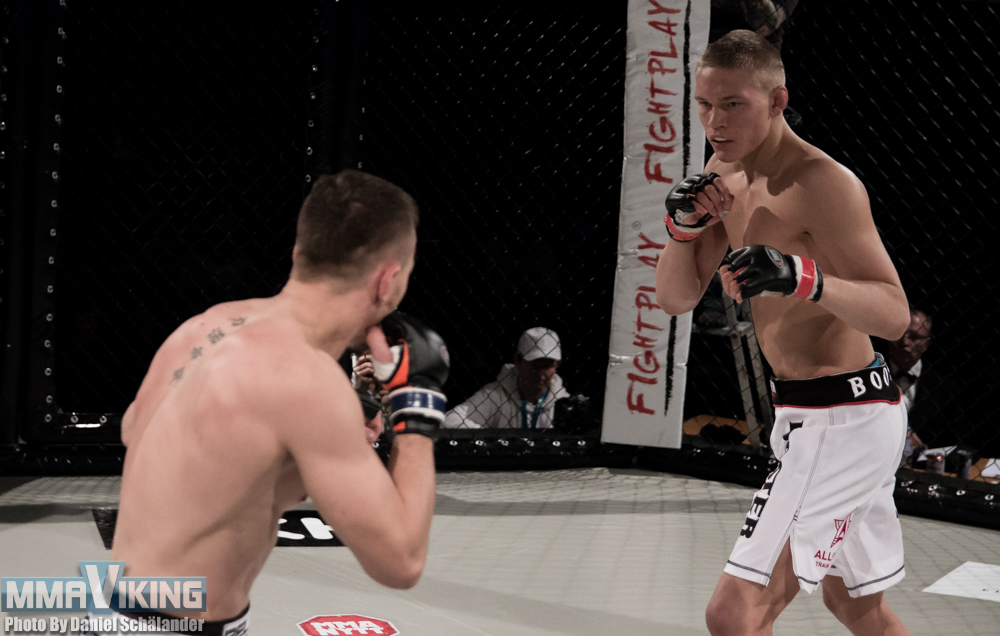 Round 2
Bienek again goes for a take-down, but Enkamp whips him over with a nice wizzard. Again the Polish fighter is in on the takedown, but this time Enkamp looks for some sort of submission, flopping to his back. The Swede doesn’t look to be in danger as he has his back taken. The Allstars Training Center fighter keeps composure, and Bienek slips off and now it is Enkamp looking for damage as Bienek takes high guard off his back. Good punches from Enkamp forcing the Polish fighter to his stomach, and the Swede locks on a tight rear naked choke. The tap is near… and there it is!

Enkamp wins by submission in round 2

David Teymur (Sweden) vs. Gaik Pogosyan (Russia)
Round 1
Both fighters look relaxed. Teymur with sime left kicks. Such quick hands from the Swede. Teymur missing a kick, and Pogosyan looking for a take-down, but it’s not there. Teymur looks in control here with his kicks on the outside. Allstars coaches tell him to keep his distance, but Teymur is tight in the clinch and Teymur looks for a knee to the face. And a left knee lands, again and again and again. It’s over as Pogosyan says no more.

Teymur wins by TKO in round 1

Round 1
Good right leg kick and knee from Albrektsson. Slow pace to start here, as the two figure out distance, but in the tie-up it is an imposing Swede with another knee… and a right kick. Janiszewski gets his back to the cage and the Swede pounces with several combinations that stun the visiting fighter.

The two tie-up again, and it is the grappler that throws Janiszewski with a perfect head and arm throw… but Albrektsson rolls through. The are up, and the Swede lands good knees and really landing damage. The two are back standing, and it looks like the Polish fighter’s knee is injured as he limps to the end of the round.

Round 2
Good right kick from Albrektsson, and he is going down low. But now a good left kick to the body, and the Swede has momentum. He pushes Janiszewski against the cage, and the two fight in the clinch. Janiszewski lands a nice left hand and a body punch, and the Swede is hurt! Albrektsson tries to shoot for a take-down but he doesn’t get it, and Tomasz spins around and takes back! This is nuts, he punches to the face and this fight has turned. Janiszewski looking for punches and nowo works for an arm, but it back-fires as Albrektsson is now on top landing punches. The Swede spins to the side landing punches and knees and now takes back and moves to a rear naked choke! It looks tight but Janiszewski gives two thumbs up. But it is TIGHT…. and there is the tap.

Albrektsson wins by rear naked choke in round 2.

Daniel Teymur (Sweden) vs. Svyatoslav Shabanov (Russia)
Round 1
Right kick to start, and the sound of the kick just echoes throughout Solna hallen. Shabanov gets a single leg, and looks to finish, but Teymur is able to defend against the cage and stands up. The two escape but it is Shabanov with another try at the leg, but he can’t get it and it is now Teymur on top with side control. The coaches yell, “don’t take mount”…. but the Swede does it anyway. No…. it looks like an armbar attempt from the k-1 kickboxer, and he gets it! It is tight and Shabanov is in trouble. It is over! 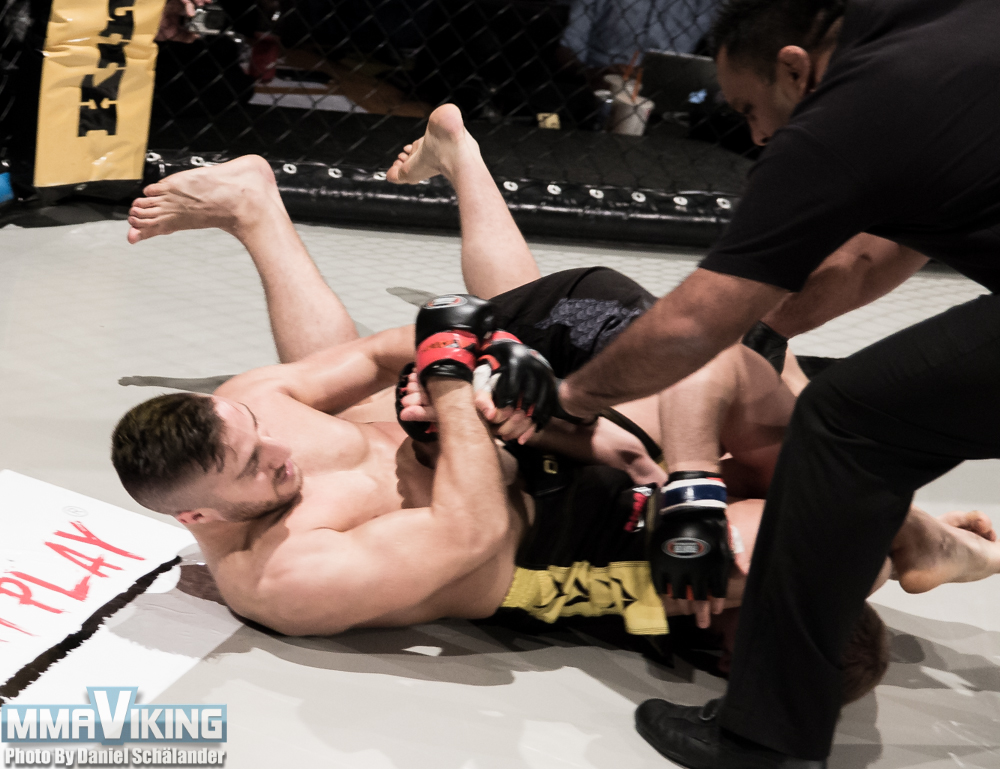 Sadibou Sy (Sweden) vs. Gabor Boraros (Slovakia)
Round 1
A left body and Sy’s power is felt in the body of Boraros. The red mark on the stomach is there already, and Sy goes back to a kick and it hurts the Slovakian.
Boraros just charges at Sy to avoid the kicks, but the Swede tries to counter with the left hand. Boraros is already a bloody mess, with what looks like a bloody nose. The referee steps in and has the doctor check it out.

Now back in action, and the Swede is using his hands now. And this looks like a just a bad matchup for the visiting fighter, as Sy’s length and kicks are just taking him apart. More kicks. The referee steps in again to have the doctors look at the fighter in trouble

Round 2
The round starts out with a nut shot. Just a low kick, that will take some time. Now back in action, and a right kick to the body. The redness in the body of Boraros is just nasty. Another left kick to the body, and Sy is picking him apart.

Sy goes high with a left high kick and Boraros stumbles back to the cage. The Slovakian tries to land punches, but Sy is too quick and lands a few more blows. A HUGE RIGHT HAND KILL SHOT, and it is over. Perfect ref stoppage after a big right hand. 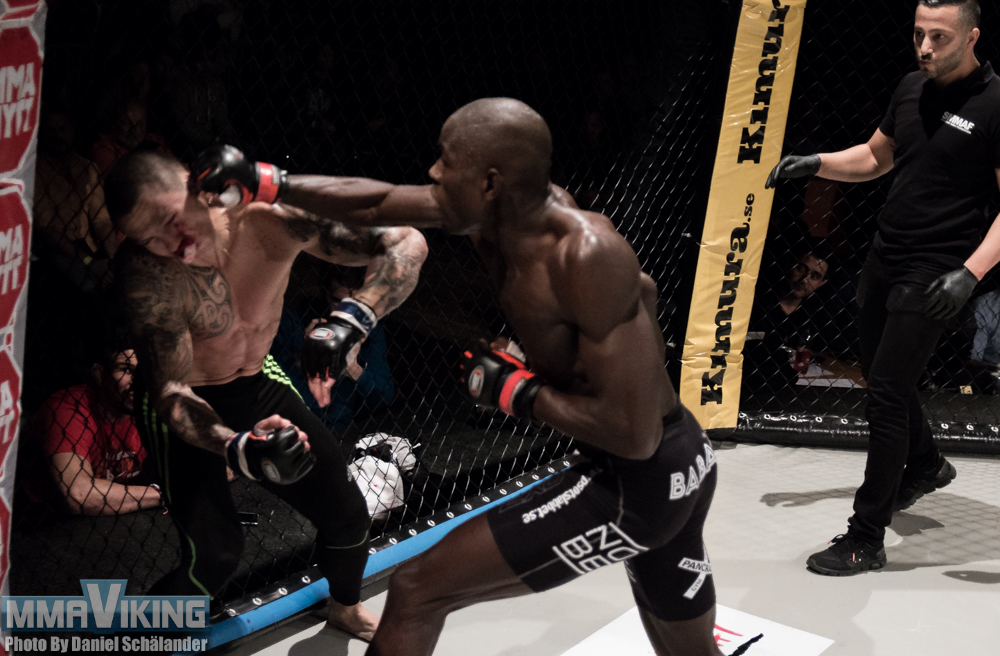 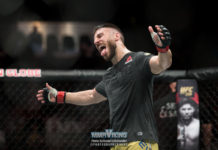 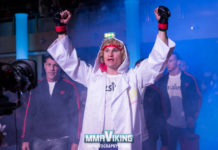