Last week, we profiled Tarjei Mørkve, the man who started and runs the popular Facebook page UFC Norway.  If you haven’t read Part 1 “Interview with The Man Behind the “UFC Norway” Facebook Page”, click here.  In part 2, we discuss what got Tarjei into in MMA and also a little more information about Norwegian fighters that goes well beyond the popular Joachim Hansen.

Tarjei Mørkve – I still remember my first meeting with MMA. It was 6-7 years ago and I was just channel-surfing in boredom and came across a preview channel called “Fight+”. They were showing cage fighting, something I had never seen before.

I have been interested and training Martial Arts since I was old enough to come along with my dad to his Karate class, and later on Taekwon-Do, so this was right down my alley. But in a way this was something else. More intense and furious. And it immediately caught my attention. I think I spent a full 5-6 hours watching cage fighting that day.

I didn’t really know what I was watching at the time as I had no knowledge of MMA as a sport. I didn’t even know it was MMA I was watching! So I started watching the channel and one day they were showing the UFC, the first Chuck Liddell vs. Tito Ortiz fight. That was the first UFC fight I ever saw. And what a fight it was! It still gives me goosebumps. And from there on I was pretty much in the spider’s web.

What upcoming Norwegian fighters should we be keeping an eye on?

Tarjei Mørkve –There is a lot of promising talent in Norway. And some notable names. Joachim Hansen, former DREAM Lightweight champ and ranked in the top 10 lightweight fighters in the world, and the first Scandinavian person to hold a MMA world title. He has done a lot to promote the sport. So thank you Joachim!

Another notable name is Dan Evensen, the first Norwegian to ever set foot in the UFC. He had two fights there, first in UFC 87 vs. Cheick Kongo and then at UFC 92 vs. Pat Barry, both were losses but that is some pretty heavy competition. Just having a man from Norway in the UFC is a win for Norwegian MMA! Jon Olav Einemo is now competing again after a long absence due to injuries. As far as I know he is only grappler to defeat Roger Gracie in the ADCC Submission Wrestling World Championship. Thomas Moon Lee (Thomas Hytten), Henning Svendsen and Jacob Sverre Løvstad is other names that has done well.

Simeon Thoresen (pictured above) is a name you might wanna take notice of. He currently has a record of 14-1-1, a very talented fighter! There is also a lot of amateur talent that hasn’t gone pro yet, but as MMA is growing in our beautiful country I am looking forward to see the development and rise of Norwegian talents.

Thanks again Tarjei.  We look forward to future reporting to keep readers informed of the scene in Norway and furthering MMA Viking’s coverage beyond Sweden. 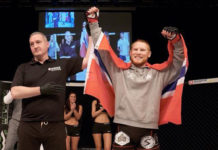