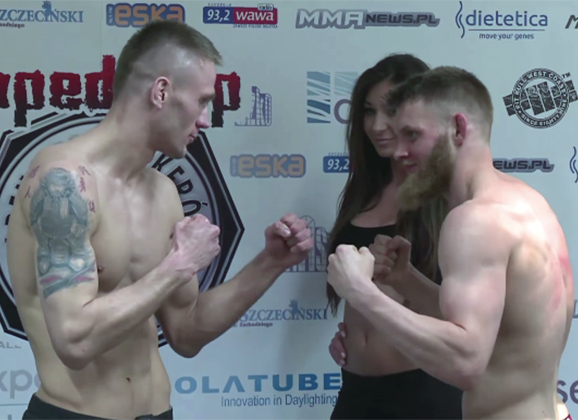 Emil Weber Meek (5-1) will make his return to the cage at the Arena Berserkerów 7. “Hulk” will be facing a local fighter in Poland’s Piotr Danelski (3-0) .

Round 1 : Both fighters start out aggressive trying to get the control of the cage, Danelski is the one who takes charge, landing some good punches and two flying knees. Meek is having a hard time to really accomplish anything until he gets Danelski on his back throwing some punches just before the time runs out.

Round 2 : Meek comes out much more aggressive than the previous round but Danelski soon takes back the control of the cage. Meek tries to use good head and body movement to get closer to Danelski who responds with punchcombos and moving away. Danelski has a short guillotine attempt after Meek gets him down but Meek gets away lands a good strike and the time runs out.

Round 3 : Meek starts this round like the previous one coming out as the more aggressive one working with nice strikes. Meek has the Polish fighter hurt! It looks like the finish is near as the Norwegian lands huge blow after huge blow.  The bout is stopped by the referee for mouthpiece being out, but it looks like Danelski doesn’t want to fight anymore. This may be it, but the referee is confused and both fighters get a break.

Both fighters are very exhausted for the last minute and doesn’t have much power in their strikes, time runs out and it goes to the judges. While waiting for the decision both fighters drop down and do some push ups side by side. Winner by majority decision is Piotr Danelski, 29-28, 28-28, 29-28. Wow, surprising score cards!

Talking with head coach Carsten Ettrup, they are looking at protesting the decision. More coming as soon as it becomes available.

Meek took to Instagram to say (translated to English) “Who do you think was the best fighter tonight!?!?!? Team Hulk, audience, ringside judge and Danielski even thought Hulk won!”