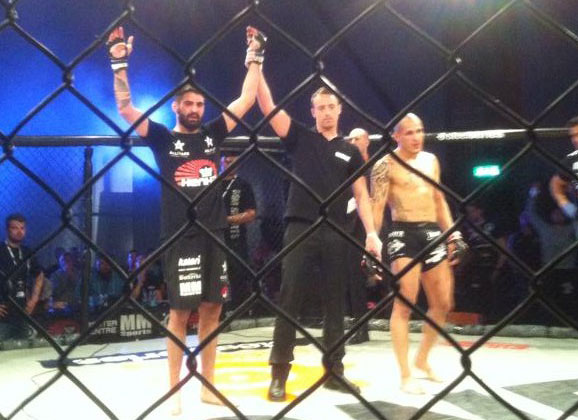 It has been nearly two years since MMA fans have seen Sweden’s Frantz Slioa in the cage, but the Allstar Training Center fighter returned without any ring rust to win a war in Gothenburg against Rafael Macedo da Silva from Swedish Top Team.

“My mother passed away from cancer last summer. I didn’t train for at least 4 months. Now I’m back.” says Slioa about the layoff and return Saturday night.

The featherweight who turned pro in 2011 hasn’t fought since a decision victory against Rami Aziz at The Zone FC 10 in May of 2012, now goes to four wins and no losses with the victory.

“I do not feel threatened by a colored belt. I have better wrestling.” says the 23 year old about his black belt opponent, who was able to to get out of several guillotines and leg attacks throughout the 15 minute battle at The Zone FC 13 at the Lisebergshallen.

Macedo da Silva came into the bout with an impressive six win and one loss record, but Slioa used his scrambling skills and high-paced style to stop the dangerous Brazilian.  Slioa trains with other ground specialists at Allstars Training Center such as Diego Gonzalez, Fernando Gonzalez, and Niklas Backstrom.

All three judges saw the 15 minute battle in favor of Slioa, who thanks sponsors Kenka, MMA Sports, and Kalori that allow him to train full time.