Alexander Gustafsonn, Sweden’s only fighter currently under UFC contract, won his debut tonight at UFC 105.  The fight was shown on TV Sport 4 15 minutes before the main card started.  The Mauler’s straight right put an end to the fight in the first round.  Pictures and additional reports coming soon!

Congrats to Gustafsson, and I hope his right hand helps bring the UFC to Sweden. 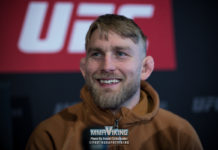 Gustafsson is ‘Very Motivated’ and Ready to ‘Maul’ Werdum’s Face

Report: Gustafsson Coming Out Of Retirement, Faces Werdum At Heavyweight