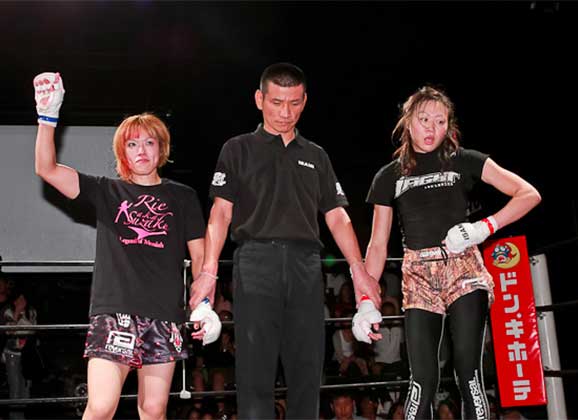 Norway’s Celine Haga fought Sadee Numata at Deep – Jewels 1 at the end of last month, but today she is battling another challenge. The fighter with 5 wins and 12 losses broke her orbital bone in the first round, but the viking continued to fight until the end, losing a split decision. Now, without insurance, the fighter is left with a $15,000 bill since injuries related to martial arts are not covered by Norway insurance.

THANKS FOR THE PICTURE SHERDOG.COM!

Below is the post from Haga about the injury:

I broke my orbital bone in my last fight.I could not go back to Norway aftert..because of the airpressure …so i had to do the surgery at Jikei hospital in Tokyo. I had to remove hipbone into my eye..and stayed in hospital for 2 weeks.
It costed ca 90 000 nok or 15 000 usd..
No insuranc in Norway cover any injuries related to martial art..

The fight was almost cancelled as my opponent didnt make weight, however I wanted to show some bushido spirit and take the fight anyway..
in my advantage i was told that my opponent would get two yellow cards. I broke my eyebone first round..whic hi believe i won..and i kept on fighting the second round too..untill the fight was over.
I lost on split decision. However, I was later told that my opponent was not deducted any points , so after all the two yellow cards didnt really give me any advantage at all.

Im dissapointed..
Anyway..i broke my eyebone not my heart or spirit..

but I wont be able to train for a long time..and the medical bill have given me problems.
I dont have a job now ..neither a home (staying at my parents house at the moment..) really appreciate all the help i can get..