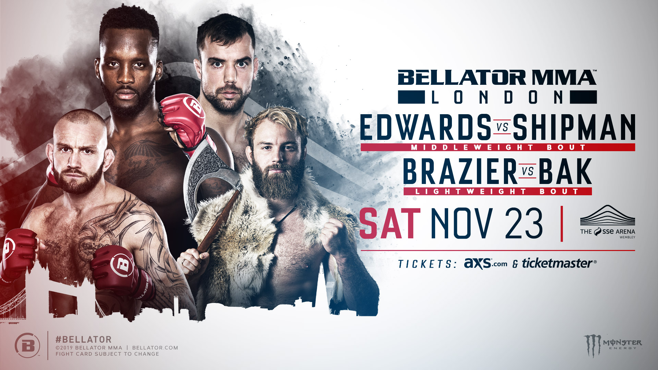 Denmark’s Søren “The True Viking” Bak (13-1), who will be making his Bellator debut.

Terry Brazier will make his third appearance for Bellator when he returns to London, the city which earlier this year saw him return to his winning ways, defeating Alessandro Botti with a comfortable third-round submission. The Windsor-based fighter and former paratrooper achieved two world titles under the BAMMA promotion before signing with Bellator. A win over Søren Bak will keep Brazier on his upwards trajectory and bring him closer to a title shot under the Bellator banner. Standing in his way and hoping to silence the home crowd on the night will be Bellator debutant Søren Bak, who fights out of Denmark. The 27-year-old departs Cage Warriors as their current lightweight and interim featherweight champion to join Bellator. The Danish fighter has star potential and will be hoping to add another win to his impressive record which includes an array of wins by submission and KO/TKO.

Bellator London marks the sixth Bellator European Series event of 2019 and will air LIVE at 10 p.m. GMT on Channel 5 in the UK. In the U.S., the event will stream live on the Bellator Mobile App at 5 p.m. ET/4 p.m. CT.