Today officials from Superior Challenge announced another addition to the solid card being held on October 6 at Malmö Arena in Sweden. Swede Matti Mäkelä and UFC alumni James McSweeney have been paired up to battle. 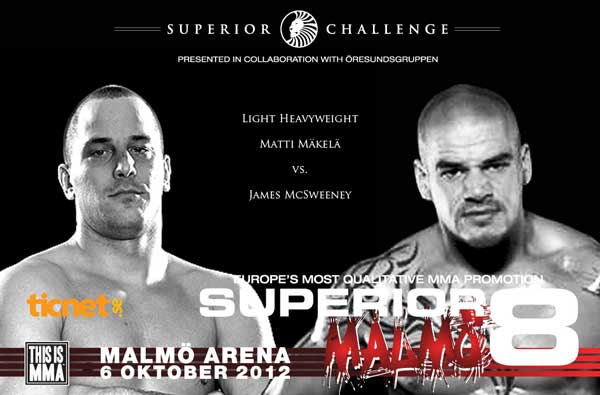 Matti Mäkelä has a tough opponent in James McSweeney at Superior Challenge 8 on October 6:th, at Malmö Arena in Sweden.

The Englishman James is best known from The Ultimate Fighter. He started practicing kickboxing in early years, and moved to Thailand when he was only 15 years old in order to focus 100% on his Muay Thai training. The young fighter competed frequently and successfully for several years. James started with MMA in 2006 and began competing in the sport the year after. In 2008 he came incontact with Rashad Evans and helped him prepare for his bout against Forest Griffin on December the same year. During 2009 he was chosen to become a TUF competitor, and he became quickly one of the most promising contestants but he lost the semi final bout against Roy Nelson. Yet, he signed a contract with the UFC, and he has during his professional MMA career managed to gather a record of10-9-0.

The hometown fighter’s record is almost identical 10-10-0 at the moment, but it will change soon. The Swede has a bout against Joachim Christensen a month before the fight against McSweeney at Superior Challenge 8.

Babak Aghavali, CEO Superior Group International:
– Matti Mäkelä vs. James McSweeney will probably be the most dramatic bout at Superior Challenge 8, on October 6th, in Malmö, Sweden. Both athletes are outstanding stand-up fighters, and brawlers who likes to stand and exchange punches rather than being tactical or defensive. These are two aggressive bulls that will collide, and I don’t think the bout will last for three rounds. It seems to be an action packed bout from the initial second, and it will end up in an orgy of strikes, knees and kicks. It definitely has the potential to become The Fight of the Evening.