Bielkheden takes on “The Heat”
David faces his career’s perhaps most important bout against Karo Parisyan at Superior Challenge 8 on October 6th in Sweden. 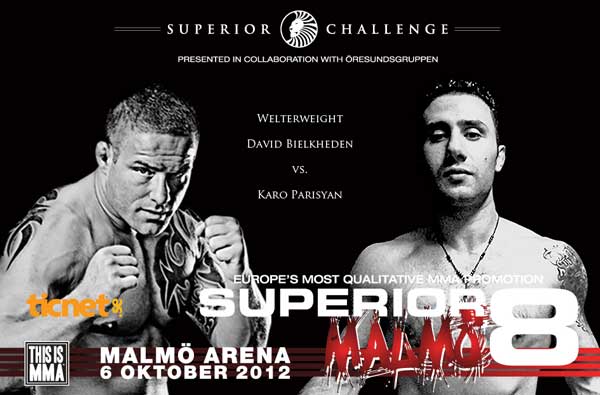 “This is one of Superior Challenge’s greatest match-ups and I can not wait until the fight night.” – Aghavali

Karo Parisyan is the first MMA athlete who managed to implement Judo techniques successfully in his fighting style. The Armenian-born American succeeded toachieve his dream in 2004 when he qualified for the U.S. Olympic team in Judo, but he got a contract proposal from the UFC at the same time, which he chose instead. During the seven years that he competed for the organization (1 bout at WEC), he accomplished wins over fighters such as Shonie Carter, Nick Diaz, Chris Lytle, Matt Serra, Nick Thompson, Drew Fickett, Josh Burkman, and RyoChonan. He was considered one of the foremost talents in his weight class but knee and back injuries put an end to the advancements of his career. Karo has fought two bouts per year during the past two years, which is a great achievement when you consider the rehabilitation of his injuries. But now he is ones again focused on his career and tired of all the negative rumours that have circled around him. The 29 year old is known for his Judo throws and aggressive fighting style. He is also very open with expressing his thoughts about people that he does not like. Anyone who has time or is interested can listen to this very deep and interesting interview on the Sherdog: http://sherdogvideos.com/rewind/rewind_ep49_6_3_12.mp3. The WEC champion, Olympic Judoka, and UFC veteran “The Heat” is hungry to win and will not let anyone stand in his way. He wants to silenceeveryone who has doubted him.

On October 6, he will be standing face to face against David Bielkheden at Malmö arena in Sweden, as the Co Main Event of the evening. David will encounter his career’s perhaps most important bout. A win over such a big name as Karo will give him a huge push in the right direction. The Brazilian Top Team / Hilti fighter will have his trainer and coach Murilo Bustamante in his corner.

Babak Aghavali, CEO Superior Group International:
– I’m very glad to announce this bout at Superior Challenge, here in Sweden. David is incredibly charged and prepared for this fight, and I’ve never seen him so focused before. Karo is a fantastic athlete, a tough guy and a very experienced fighter who will do everything in his power to win. This is one of Superior Challenge’s greatest match-ups and I can not wait until the fight night.