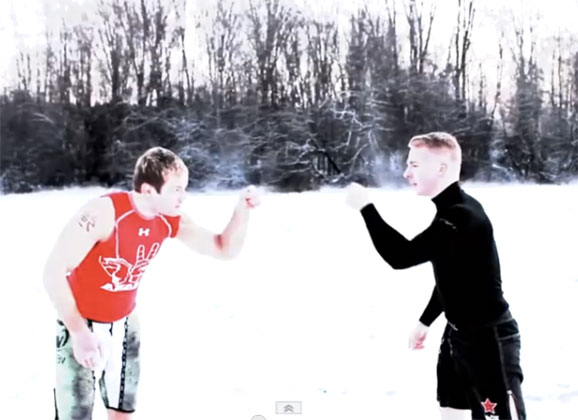 There are few better examples of ancient grappling tradition than those found in the Far Reaches of the North, where the savage Vikings would battle for dominance, social standing, and most importantly honor. There are even ancient texts which depict a grappling tournament between Gods, namely that between Thor and Elli. Yes, in the harsh northern lands, a breed of warrior exists that thrives upon the thrill of battle, and that fire warms them, even in the frigid winter cold. On the 15th of February, in Vantaa, Finland the warriors with this brutal ethos and Viking drive will have a chance to compete against one another, and the frigid cold in an Open-Air No-Gi Submission Wrestling competition.

MMA Vantaa announced earlier this week that they will hosting an outdoor No-Gi event on 15th of February in Vantaa, Finland. The competitors will grapple in the freezing cold on a mat area that will be set up on the yard of a local sports hall. The four minute matches will be held under modified ADCC rules where the point scoring will begin straight from the start.

The idea for this exceptional event came in the gym’s development meeting according to MMA Vantaa rep Jussi Mäkelä:
“We were thinking about new ways to get some publicity for the team and this idea came up. There’s room for this kind of events in the Finnish combat sport scene. It’s going to be fun for sure. The economy is bad so we got down on costs. This time saved in rent and put the event outside to the yard. ” said Mäkelä to FightSport.fi. According to FightSport.fi there will be a sauna for the fighters to warm up and a DJ for the crowd.

Since it’s the Finns that we’re talking about here, it’s no surprise that the Finnish Judo Federation is getting in to the mix by organizing Deep Snow Judo World Championships in mid March. The competitors will battle for the World Championships medals in deep snow. Mandatory equipment are judo kimono, belt and mittens. It is also recommended that the athletes wear a beanie or a fur cap to protect their heads from the cold.