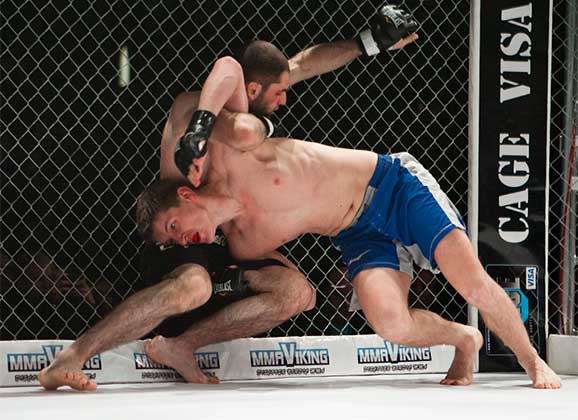 European MMA (EUMMA) 8 match-ups are starting to come together for their upcoming February 22nd card. The promotion is back at the Brøndbyhallen in Brøndby, Denmark for its 8th event, which will be topped by two top Nordic lightweight fighters in an exciting matchup between Denmark’s Ayub Tashkilot (11-3) versus Estonia’s Ott Tönissaar (7-1).  The promotion released a few match-ups today.

The marquee matchup between Tashkilot and Tönissaar will determine the new EUMMA belt holder. Undefeated since his lost to Swede Claes Beverlov back in April of 2011, Tashkilot has won his last four fights including his last three with the EUMMA promotion. The Iranian born fighter has won his last 8 out of 9 bouts, while his opponent Tönissaar from Team Scared & Paranoid has won 7 of his 8 professional bouts. Tönissaar is coming off of a huge win last November as he upset the Finland based Musa Amagov at Cage 19.

Another quality bout on the card includes Denmark’s Joachim Christensen who is 8 and 3 and ranked as the #5 light heavyweight in the Nordics.  He will face an up-and-coming German in Stephan Pütz who is undefeated at 9 wins and 0 losses, winning four bouts in 2013.

The popular Norwegian Thomas Formo will also be looking to flex his skills as he faces a more experienced Harun Kina in a welterweight bout.

Søren Bak, who has been a fixture on European MMA events and winning all of his professional bouts with the organization, will also be on the card.

Expect more fighters and bouts to be solidified in the upcoming weeks.