Cancellations due to injuries and other reasons have forced Lappeenranta based Fight Night promotion to make more changes to it’s upcoming show on the 14th of April.

Finnish top welterweight Ville Räsänen is injured and the fight with Russian Sergei Bal is scratched from the card.

Another welterweight who had to cancel was Finland’s Lauri Tonteri. Jake Anttila will step in for his countryman and fight Sweden’s Fernando Gonzales in a 73 kg catchweight bout.

Completely new fight on the card is the lightweight bout between Finland’s Jimmy Immonen and Englishman Dale Hardiman. 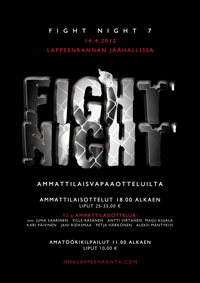