MMA Viking continues to provide MMA content to the growing blog for the leading online gaming company Betsafe. Ryan O’Leary, founder of MMAViking.com, writes a UFC LAWLER VS DOS ANJOS PREVIEW, BETTING TIPS, AND ODDS article. For Nordic fans, there aren’t any fighters on the card, but you will see Alexander Gustafsson and Emil Weber Meek’s previous opponents featured.

The UFC heads to Canada with 10 fights this Saturday. Topping the card is a showdown of previous title holders as ex-welterweight champ Robbie Lawler takes on ex-lightweight belt holder Rafael dos Anjos.

Former title challenger Ricardo Lamas was set for a re-match with Jose Aldo, but the Brazilian was called up for a title fight instead when Frankie Edgar was injured. Instead, Lamas will face Josh Emmett.

Let’s take a closer look at the card going down at the MTS Centre in Winnipeg, Manitoba, Canada.
VIEW FULL ARTICLE WITH FIGHT-BY-FIGHT BREAKDOWN, BETTING TIPS, AND ODDS ON BETSAFE.COM 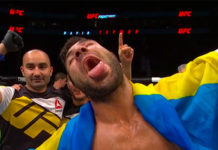