Now that everything has calmed down, it is time to evaluate the monumental Royal Arena 1 event held on March 10. Below is a breakdown, plus content partner Fightfan.dk’s coverage of the event.

As mentioned before, Royal Arena is the first time the mainstream masses in Denmark have been exposed to MMA, especially in this magnitude, so naturally a lot of people were anxious, fans and fighters alike. It would later become clear that this anxiety was unnecessary.

From top to bottom the fights were exciting. The production was the best seen yet and everything was conducted in a professional way. The night progressed very smoothly and in natural fashion, without any real ‘hiccups’ or delays.

Even so, one of the most positive elements was the crowd and the atmosphere. From start to finish, disregarding a few boos here and there, the crowd were respectful and seemed to know their stuff. When passing to sidemount, getting underhooks from bottom and so forth results in applause, you know it’s not a half bad crowd. Even though MMA in Denmark is growing, it is still at a stage where a lot of the people attending are family, friends or even fighters themselves, so I that helps a bit too.

It was exhilarating to witness the enthusiasm of everyone involved and the fighters indeed put on a show. Everyone seemed to understand how big of an opportunity this was to show what MMA is really about to the newcomers.

The true ramifications of the event and the future of MMA in Denmark are yet to be known. All that can be said is that the event lived up to the hype and was a good showcase of Danish MMA and one that we can be proud of. People’s eyes were opened and hopefully it brought more fans to the sport that we are all so passionate about. Here is to hoping MMA keeps growing in Denmark and the success will continue. The following is a translation of Fightfan.dk’s coverage of the event :

With live TV broadcasting on TV2 Sport and coverage of the whole event from Ekstra Bladet, a great production and a, on paper, strong Fightcard, a lot was at stake for the organizers and crew. 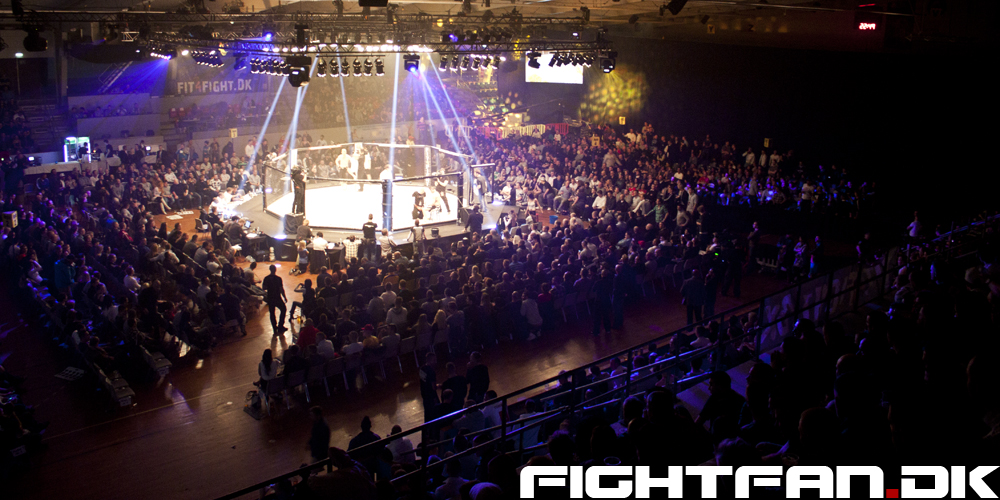 Royal Arena seen from the back rows

After arriving at Brøndby Hallen, we walked around a bit and took a look at what was happening behind the scenes. Everyone was occupied and they seemed very professional and well-prepared. There was this kind of unseen calm everywhere. Usually when we cover MMA events, and arrive early for the preparations, people are strung out and stressed.  Three big screens gave the audience the possibility of watching introduction videos of the fighters and follow them all the way from backstage.

Quick finish in ”secret” fight
Despite how well organized the event was, no event is without a few delays. The “secret” fight between Søren Bak and Jason Forsell started half an hour later than it was supposed to. Luckily there was enough time until the ‘real’ event started.

The fight worked as test run, to get all the technical equipment in place and make sure everything was working as it should. Whether or not the fight was helpful in that regard is hard to say, as the fight ended within a few minutes, with Søren Bak as the winner by rear naked choke. 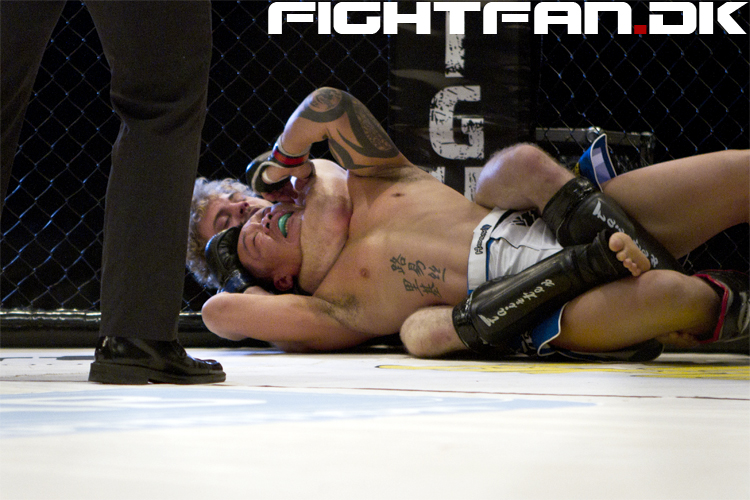 Swedish groin kicks
The first fight on the card was between Philip Fortuna and Marcus Carnefjord. Philip had only one pro fight coming in to this one, which he lost at the Fightergalla 23 event. This fight too didn’t start well for Philip, as he got hit with two groundkicks in the first round. Although they were most likely unintentional, Marcus got a point deducted after the second kick. On the ground Philip was superior and he managed to mount Marcus in the second round. After some GnP he caught him in an arm triangle and finished the fight. 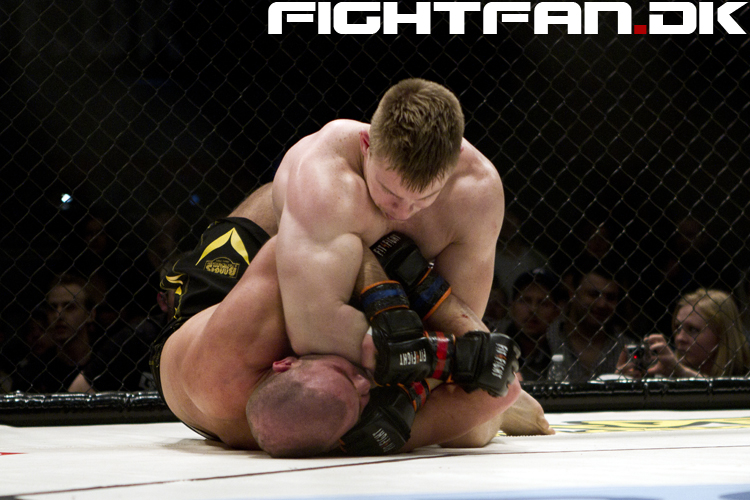 Philip Fortuna dominated his opponent on the ground

The following fight between Nicola Gozzi and Jonathan Svensson went the distance and ended in a controversial split decision. Two of the judges had Jonathan as the winner and one had Nicola, but a large amount of the crowd seemed to disagree. 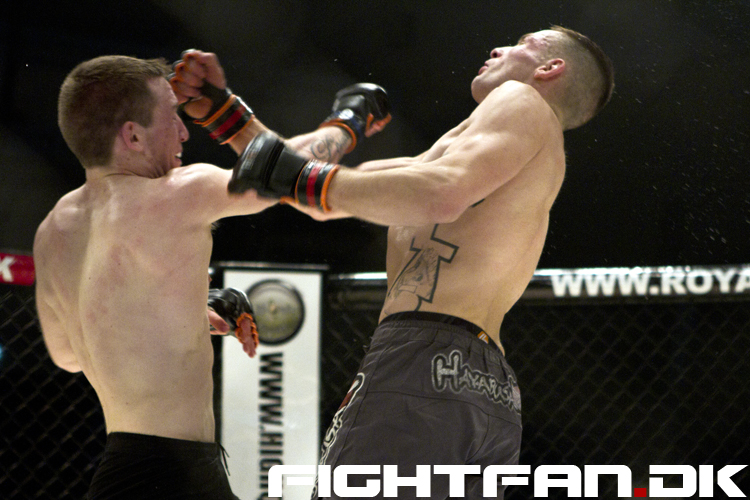 Nicola Gozzi was pressured by his Swedish opponent

Whether or not the decision was right, you have to give the Swede credit. Especially his leg kicks were very nasty. Nicola’s left knee was almost black after the fight.

Successful pro debut
Mulenga Chanda, from the Danish city Århus, had his pro debut at the event – And it was a successful one. His opponent from Czech Republic made a valid effort in the first round and attacked with a few good submission attempts, but without any luck. In the second round Mulenga finished the fight by guillotine choke and secured his first pro victory. 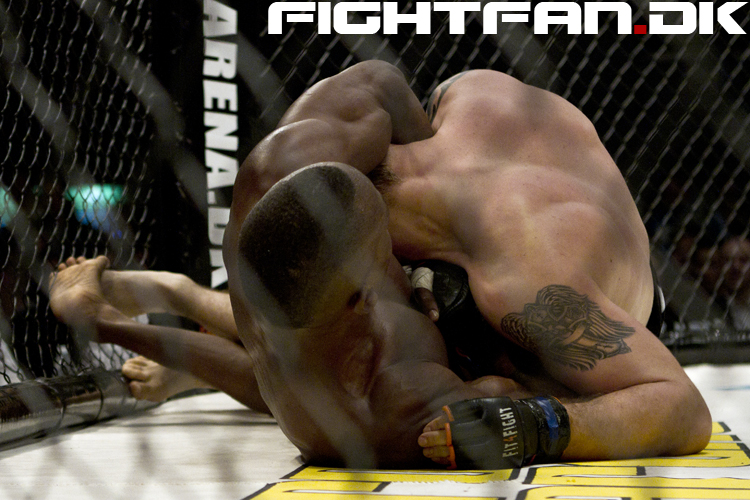 Mulenga Chanda wins his debut with a deep guillotine choke

In the last fight on the undercard, Joachim Christensen won against Wojciech Antczak. One of Joachim’s biggest assets is his high caliber BJJ, and it showed while he sunk in the rear naked choke that gave him the victory by first round submission. 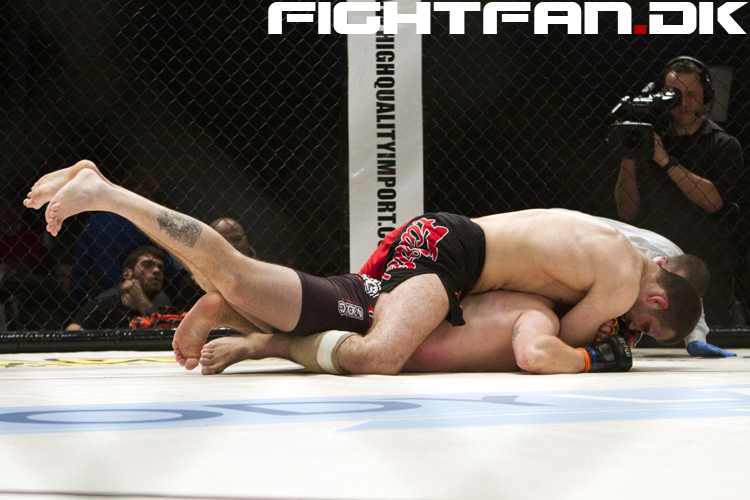 Joachim made quick work of his opponent

Bloody defeat for Rosfort
The fight between Kenneth Rosfort-Nees and Ivica Truscek went the distance. 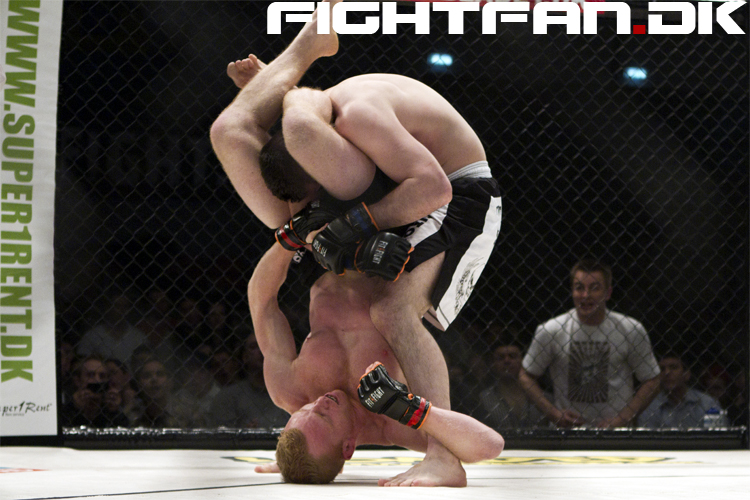 Kenneth Rosfort-Nees going for a triangle, without success

The two fighters pressured each other through the entire fight, but the fight still went the distance. During the fight, the blood started gushing out of Kenneth’s nose and it seemed to affect his performance. After three hard fought rounds, Ivica Truscek was declaired the winner by unanimous decision.

After the event, we talked with Kenneth’s coach, Tue Trnka, who told us that Kenneth had sustained a nose injury during training camp. Ivica reinjured it with a punch early in the fight, which made it hard for Kenneth to breathe properly and get air. 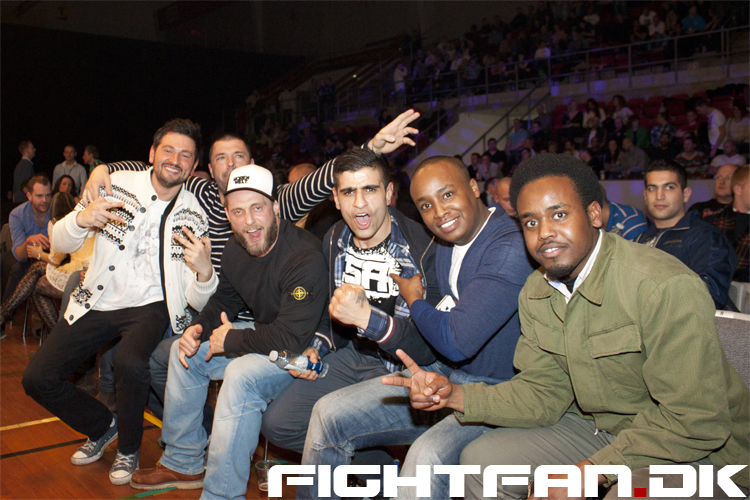 There was a lot of happy people near ringside.

‘Close decision’ to Dalby
Another Dane who was in a tough contest was the young hope, Nicolas Dalby. He went into the fight undefeated, with 6 straight wins, and a lot of buzz. His Spanish opponent, Acoidan Duque, was likewise undefeated, with a record of 5-0. Only one could walk away with a spotless record. 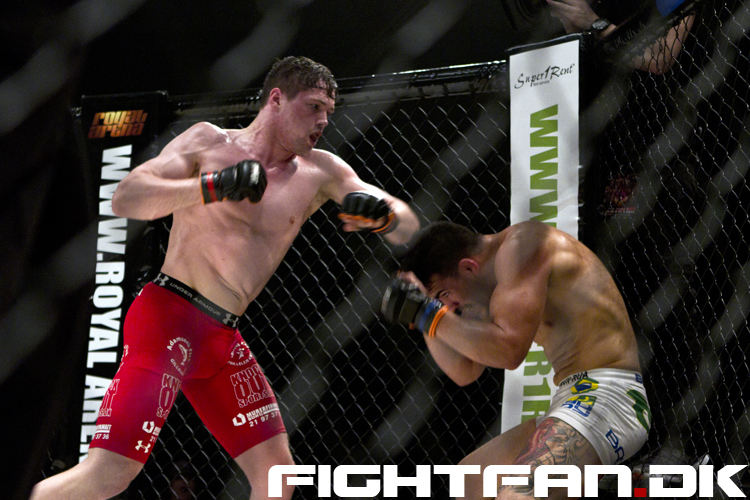 Nicolas Dalby turning up the heat in the third round

After three very intense rounds, Nicolas was awarded the decision. All three judges scored it 2-1 in his favour. We here at Fightfan.dk have no doubt that Nicolas won the third round, but the two previous ones were very close and especially the second could have gone either way.
The audience was really into the fight and supported Nicolas the whole way through. The place got especially wild in the third round as Nicolas rocked Acoidan several times.

Quick finishes in the main events
Simon Carlsen and young Mikkel Parlo did not waste any time in the two main events. Putting the combined time of the two fights together, it would still hardly last a round.

Simon Carlsen made quick work of Nick Osei. To call Simon an intense fighter would be an understatement. He had a vicious look in his eyes and it was clear to see that he wanted to end the fight quickly. It didn’t take long before Nick was knocked down and he received a few more blows, before the ref stopped the fight. 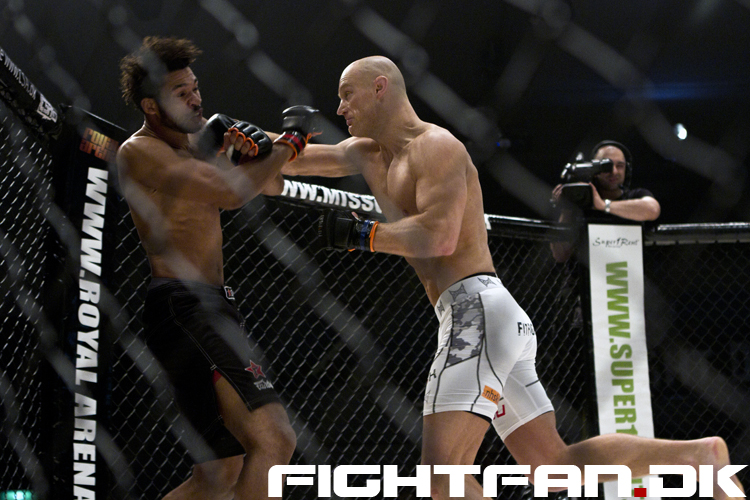 The fight between Simon and Nick was a semi-final fight for Royal Arena’s middleweight tournament. In the final, Simon will now face the young comet Mikkel Parlo. Mikkel got the night’s biggest applause as he entered the cage and the crowd erupted when he took the victory short thereafter. The event itself had an incredible atmosphere. 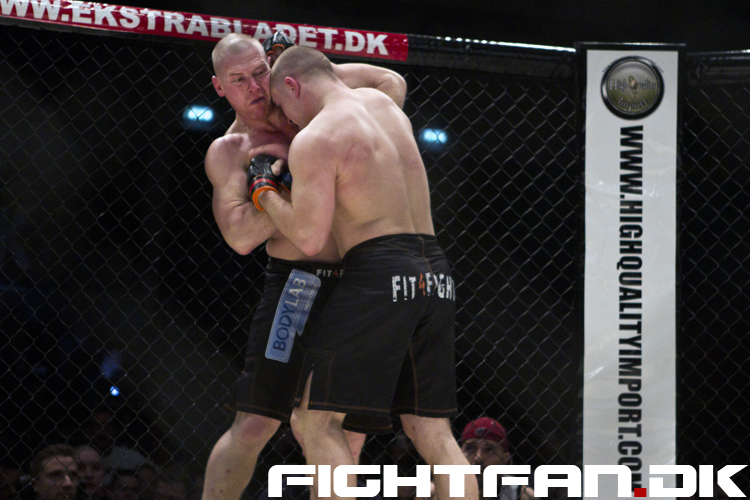 Mikkel finished the fight with a hard kick to the liver of Marcin Tondryk, which seemed to paralyze him. Mikkel delivered a few more punches, but it was clear that Marcin was done and the ref stopped the fight and gave Mikkel the win by TKO. Mikkel was visibly ecstatic with the win and did a backflip before jumping into the arms of his team. 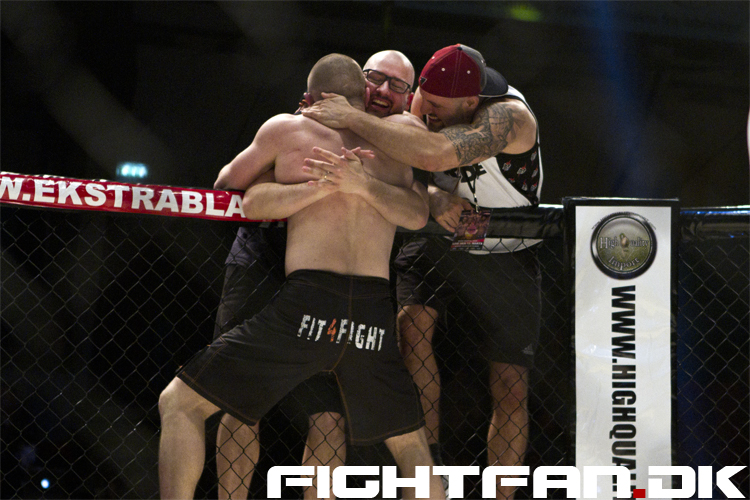 Mikkel Parlo and his team joyous of the win

We foresee a big future in MMA for Mikkel – and rumor has it that a contract with Bellator is right around the corner.
He has to finish some work in Denmark first though, in the Royal Arena middleweight final against Simon Carlsen. It is sure to be a barn burner.

Thanks for coming – until next time

After Mikkels great victory, it was time to call it a night. The show went very well and the production was top notch. The quality of the fights was great, as to be expected of a card with only pro fights.
If anything, the only problem was that it was sometimes hard to hear what was being said during the interviews in the cage.
We are looking forward to the next Royal Arena event and hopefully they can keep the momentum going and deliver an equally impressive show. 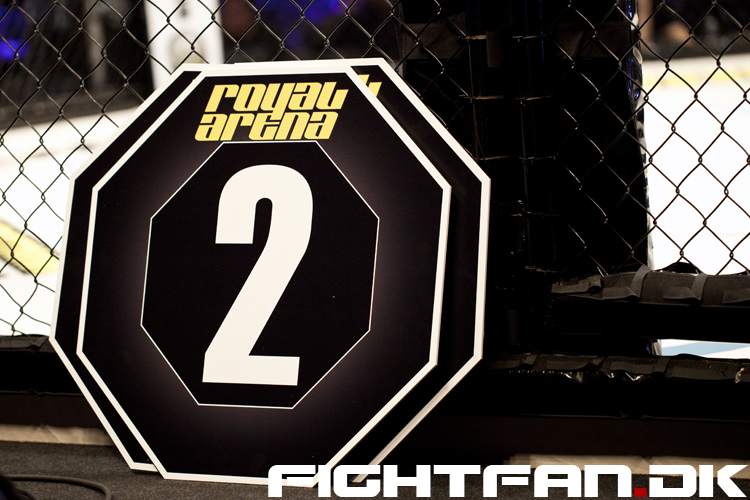 Will Royal Arena 2 be a success?

One thing is for sure, we here at fightfan.dk will follow it and cover all Royal Arena events closely.

One last thanks to Mikkel Schiødt, as he helped us cover the event.

Our Royal Arena gallery is open, and can be viewed here http://fightfan.dk/royal-arena-1.html or on our facebook site.