Discuss the results of the much anticipated prelim bout between Norway’s John-Olav Einemo hometown American fighter Mike Russow. The UFC on Fox 2 Heavyweight bout takes place in Chicago this Saturday with the main event between Rashad Evans and Phil Davis.

Round 1
Russo get’s takedown early. Einemo on his back, but able to get up. The American tries for a single, but Einemo defends. Good knee by Einemo as he fights off take-downs and looks for some damage of his own.

Big right hand by Einemo as he effectively uses his reach.

Midway through the round, and the fight still on the feet as Einemo continues with knees from the clinch.  The crowd gets a little impatient. Russo trying to land with punches, but can’t find his distance.

The college wrestler then able to finishes single, and tries for side control. Einemo in control of wrist, and looking for a submissions.

No damage done on the ground. Einemo finishes the round with sweap from the bottom directly into mount, but the round ends before any damage could be done.

Round 1 – Too close to call, could go either way. 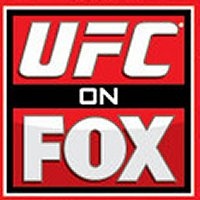 After a brief exchange on the feet, Russow is able to bring the fight to the ground.

Both look for better positions, but Russow is hesitant as he stands above the Norwegian.

The viking has closed guard, and takes an elbow at 1:20 into the bout. Clear round for Russow.  Russow making the bout look more like a wrestling match taking advantage of riding time, stays on top to take control of the second round.

Round 3
Fight stays on the feet for the first part of Round 1. Einemo lands Big shots and hurts the local fighter.  The American is in trouble.

Russow powers the bout to the ground as he recovers. The wrestler stays on top two minutes into round 3. Einemo is tired, and almost roles over the wrestler, but not enough energy to take advantage of the opportunity.

Norwegian still on his back. Referee Herb Dean stands them up with 2 minutes left in the bout. Einemo lands big knees to the head, but is then taken back to the ground.  The time that Russow spends on top in the bout will probably dictate an advantageous decision.

Final seconds of the bout has both fighters tired and gasping for air.

Thanks Espen for the tip.  Shortly after the bout, Fighters Only magazine tweeted that “Einemo tore his calf muscle”.  Read the two tweets below:

Six Nordic Fighters Make it to This Years Edition of ADCC

Photo Shoot: Einemo Training at the Frontline Gym in Oslo