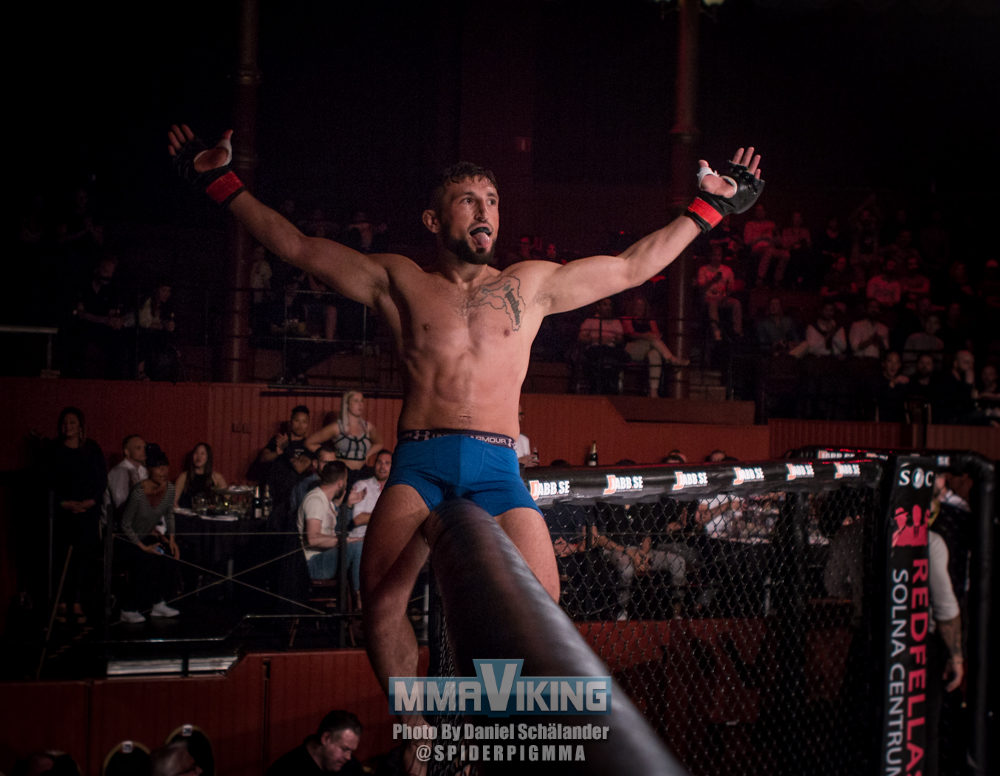 Superior Challenge 17 is happening in Stockholm. The card features some of the best local talent outside of the UFC, and given the track record of the promotion’s 10 year history, the ones you see fighting in the Superior cage will be making their way to the Octagon soon.  Get your live play-by-play and results from our cageside spot.

Round 2 – Wojcikiewicz focuses on a lot on kicking och heavy winding shots. Moya stays light on his feet picking his shots. They both are starting to slow down showing signs of fatigue. Both are picking their spots for attacks. Moya secures the takedown and ends upp in Wojcikiewiczs guard. Wojcikiewicz is active from bottom and gets up and immediately starts to press Moya against the cage. Wojcikiewicz tries for a takedown but Moya gets up with the fence at his back. Wojcikiewicz keeps attacking with combinations with both hands end feet. Wojcikiewicz lands a heavy shot at the end of the round. 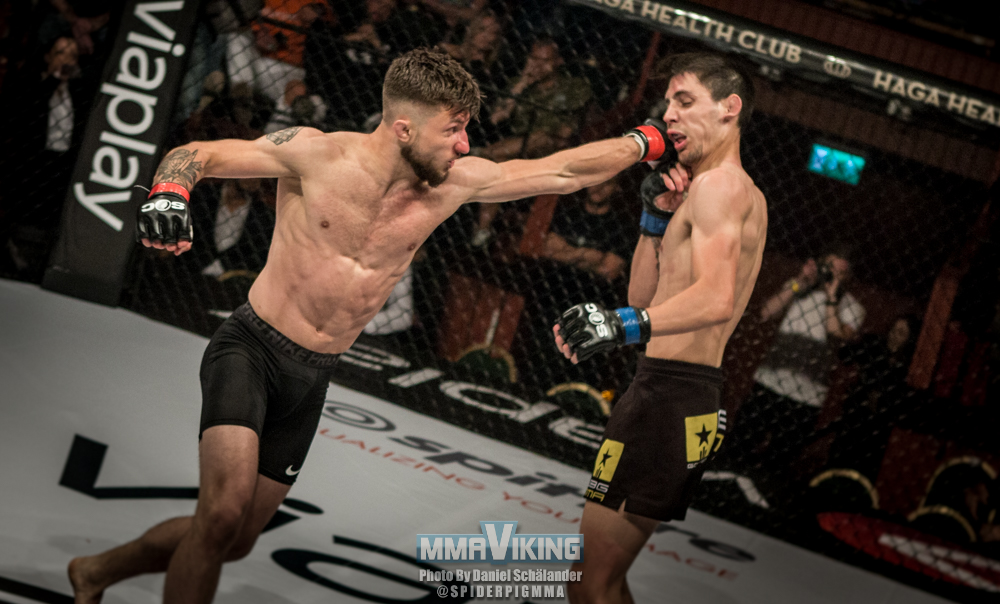 Round 3 – Moya slips for the second time in the fight but is fast on his feet again. A lot of missed hots from both fighters in the beginning of the final round of the fight. Wojcikiewicz is the aggressor with Moya moving away and effectively dodging most shots. Wojcikiewicz gets the takedown and for a short while he passes guard. But Moya does not accept the position and works his way up to his feet. They grapple standing against the fence exchanging dominant position. The referee breaks up the action but they go back to standing grappling as the fight ends.

2. Serdar Altas (0-0, Sweden) vs Luan Jashari Frantzen (0-0, Norway) – Flyweight
Round 1 – Both fighters complain to the referee that the canvas is slippery but he urges the to keep fighting. Altas presses Frantzen against the cage standing and launches knees to the body. After two minutes of the fight Altas secures a takedown that lasts 20 seconds. The fight continues up against the cage with Altas in dominant position. They separate and Altas is the more agile fighter while Frantzen waits for his shot. Altas goes back to pressing his opponent against the cage launching knees. 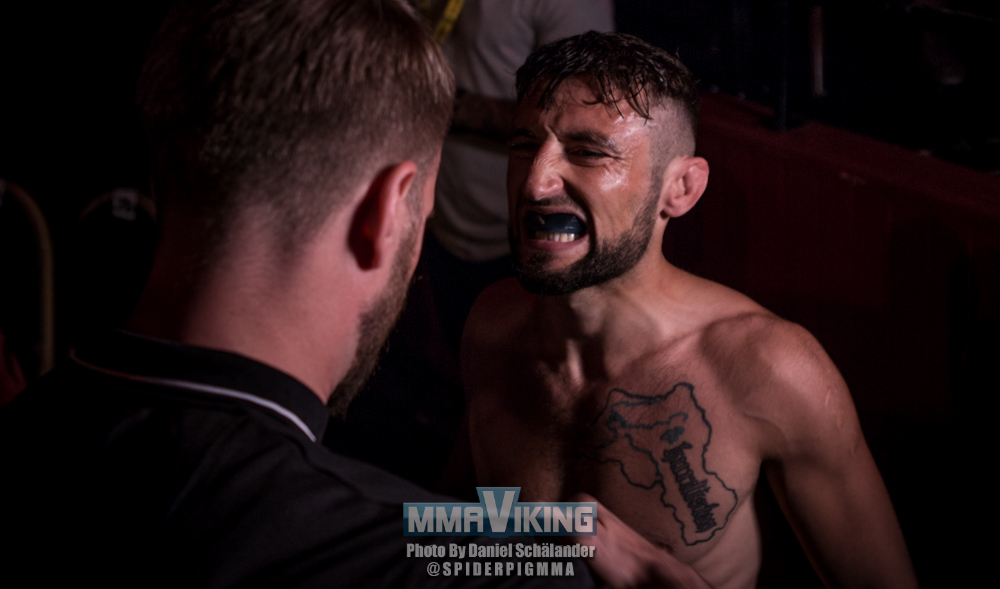 Round 2 – Altas presses the action standing while they both exchange kicks. Altas looks to yet again press his opponent against the fence but Frantzen establishes the dominant position for a while until they separate. Altas lands a right high kick to the face of Frantzen who falls to the canvas unconscious.

3. Tobias Harila (0-0, Sweden) vs Kenneth Evensen (1-0, Norway) – Featherweight
Round 1 – Evensen goes for the takedown in the beginning of the first round but Harila stuffs it. They clinch standing with Evensen pressing against the cage. harkla lands a solid knee to the body as Evensen tries for a takedown. They grapple standing for a while, exchanging favorable position but finally separate. Harila holds the centre of the cage as both fighters are looking for an opening. Few shots are launched. Suddenly Harila connects with a right left combination and Evensen falls to the canvas. The referee stops the fight as Harila tries to follow up with strikes on the ground. Perhaps an early stoppage as Evensen rolls and get up immediately after the stoppage. 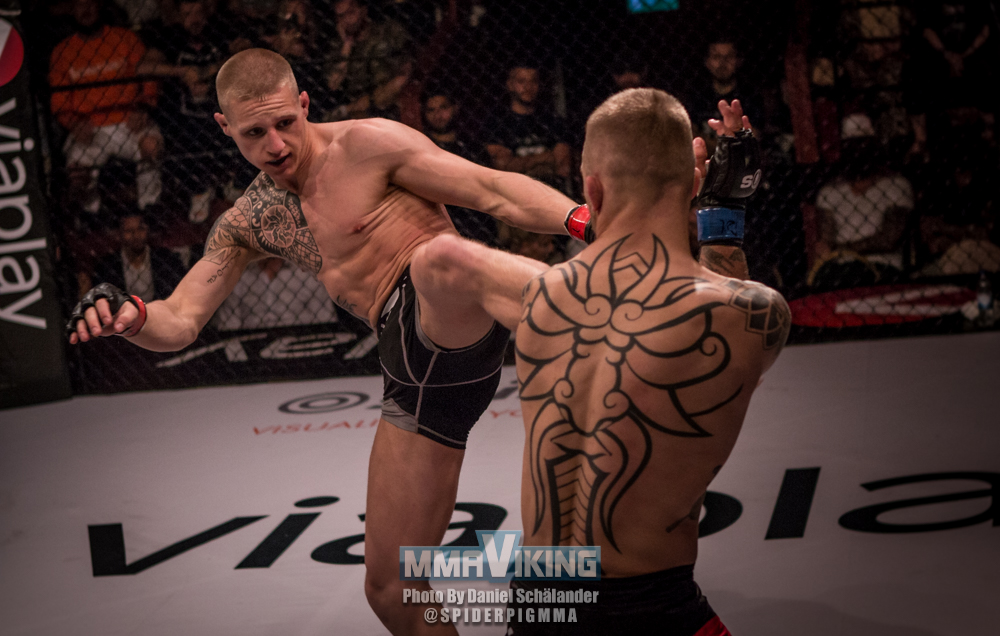 4. Rostem Akman (2-0, Sweden) vs Holivan Vieira (5-6, Brazil) – Welterweight
Round 1 – After 40 seconds and no kicks or punches Vieira tries for at takedown that Akman defends. Vieira presses the Swede against the cage and shows clearly that he wants to get the fight to the canvas. Akman keeps himself standing and in the end it is Akman that secures the takedown. Akman works strategically in the guard for a while but as Vieira gets to a better position he looks for a leglock. 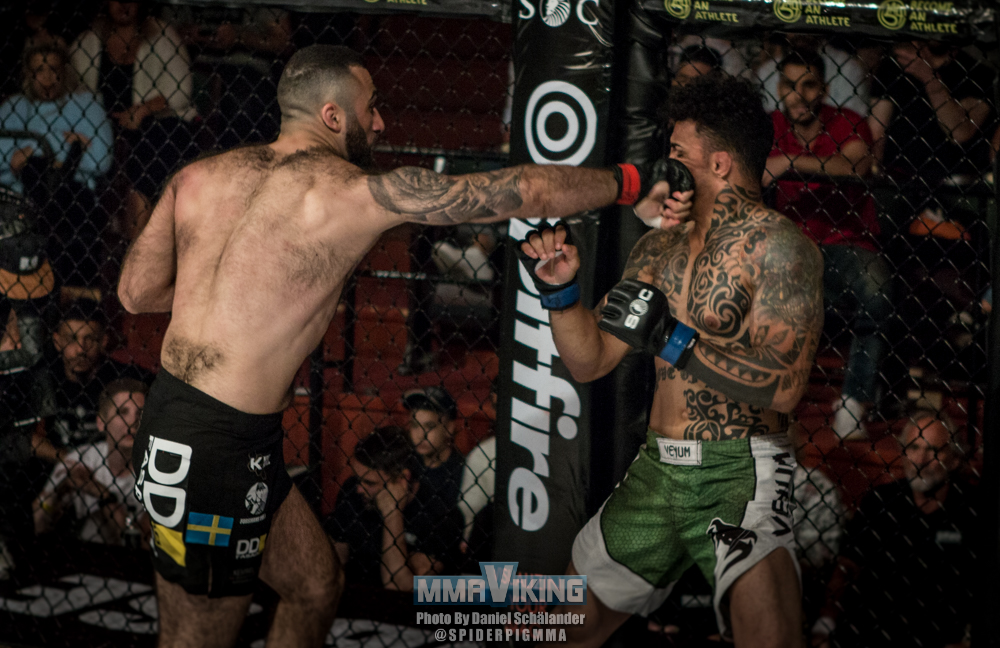 Round 2 – After initial exchanges Akman presses Vieira against the cage. Vieira gets away but shortly is back in the same position. They separate again but Akman is still the one pressing the action with punches and knees. Akman secures the takedown and lands in his opponents guard. Akman lands punch after punch with little to no offense from Vieira who is keeping the Swede in a closed guard.

Round 3 – Vieira leads with a well telegraphed body kick. Akman presses the action and lands a couple of loud kicks to the body. Akman trips but is fast on his feet again. Few punches are thrown as Akman stalks the Brazilian. Then a flurry of shots and knees from the Swede, mostly to Vieiras body. Vieira tries for a takedown via single leg but Akman defends and punishes his opponent with hard shots to the body. The fight returns to the standing realm and Akman turns up the tempo and lands a bunch of punches and ends the fight with a kick to the body.

5. Guram Kutateladze (7-2, Sweden) vs Nicolas Joannes (17-13, France) -68,5 kg
Round 1 – Kutateladze lands a hard right in the beginning exchange. But the frenchman keeps a high pace with a unorthodox flurry of punches that pushes Kutateladze to defend. Kutateladze gets a strong takedown and gets to work on the canvas in the dominant top position. Joannes is looking for an arm but Kutateladze is not having it an punishes his opponent with hard strikes and elbows from half guard. With a minute left Joannes get to his feet. He is rewarded with a hard right hook that makes him fall to the canvas. Kutateladze follows up with strikes until the referee stops at the action. 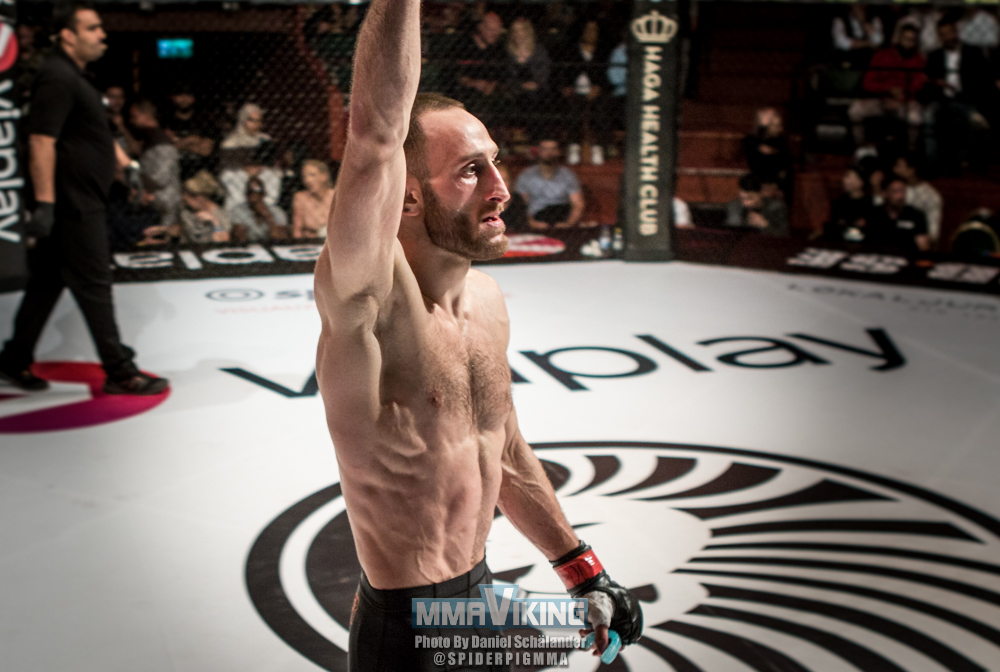 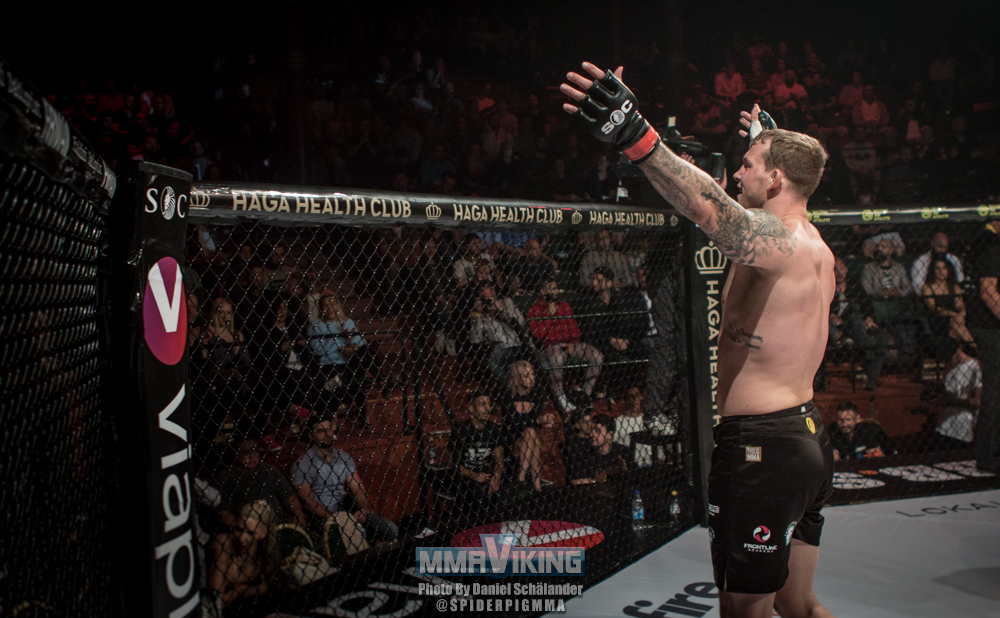 Round 1 – Hamlet lands a headkick and immediately goes for a successful takedown. Cengiz gets up but the Norwegian is on him and gets the fight to the canvas again. Cengiz tries to reverse but ends up with Hamlet on his back raining down with hard punches. Hamlet flattens his opponent and keeps the punches coming until the referee stops the fight.

7. Karl Albrektsson (6-2, Sweden) vs Dmitry Tebekin (9-3, Russia) – LHW
Round 1 – After a few punches Albrektsson changes levels and completes a takedown. The Russian gets to his feet but Albrektsson presses him against the cage wall and gets to work with punches. Tebekin signals to the referee that he wants him to break them up but Albrektsson tries for a takedown without success and the fight goes on without interference from the official. They separate and Albrektsson powers through with the takedown and lands by the fence by the Russians corner. Albrektsson works methodically with punches and keeping his dominant position the rest of the round. 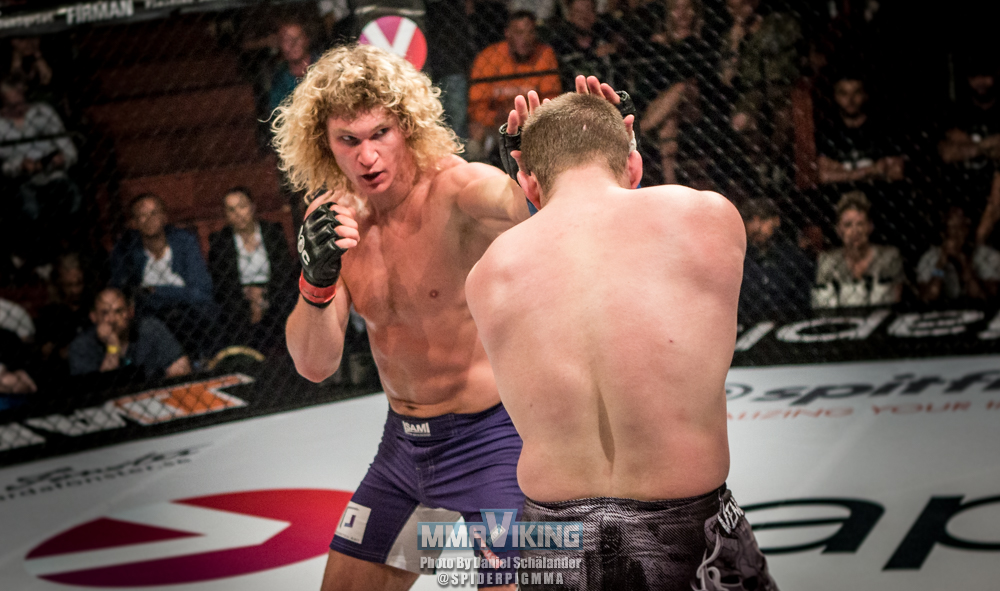 Round 2 – Albrektsson starts the round with a spinning kick that lands to the body of Tebekin. Albrektsson gets a hold of Tebekin, lifts him of his feet and slams down his opponent to the canvas with the Swede on top. Albrektsson is in the closed guard of Tebekin and starts the ground and pound. Albrektsson improves to half guard and works with punches and elbows. Albrektsson picks up the tempo of his offense and finally the referee stops the bout.

8. Simon Sköld (8-5, Sweden) vs Jerry Kvarnström (13-11, Finland) -67 kg
Round 1 – Sköld starts of in a karate stance and Kvarnström seems to have trouble finding his range as he runs forward in his offense. After a scramble Sköld ends up in the top position on the canvas. The Swede establishes full mount but Kvarnström reverses. Sköld gets up and starts landing with punches. Kvarnström gets a hold of the Swedes neck and tries for a guillotine for a longer period of time. Sköld impressively works his way out of the choke. 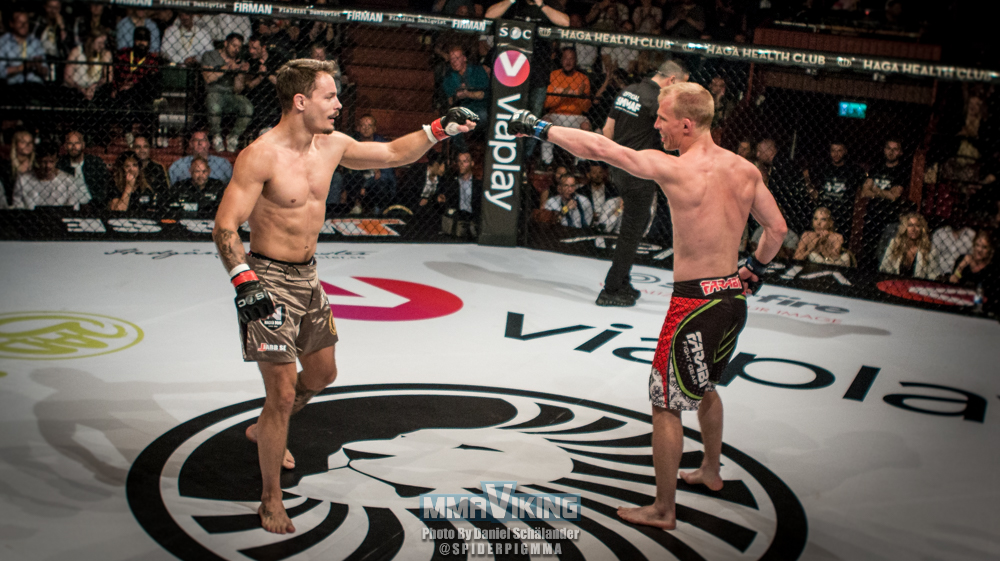 Round 3 – Kvarnström starts with a low kick and gets answered with a flurry of punches. Kvarnström tries for the takedown but Sköld sprawls for a period but ends up on the bottom. Sköld threatens with the triangle choke but Kvarnström defends in top position. The Finn keeps dominant position on the canvas for a longer period against the fence wall. The grappling continues with Kvarnström getting the upper hand on the Swede. Sköld gets caught in a tight choke and is forced to tap. 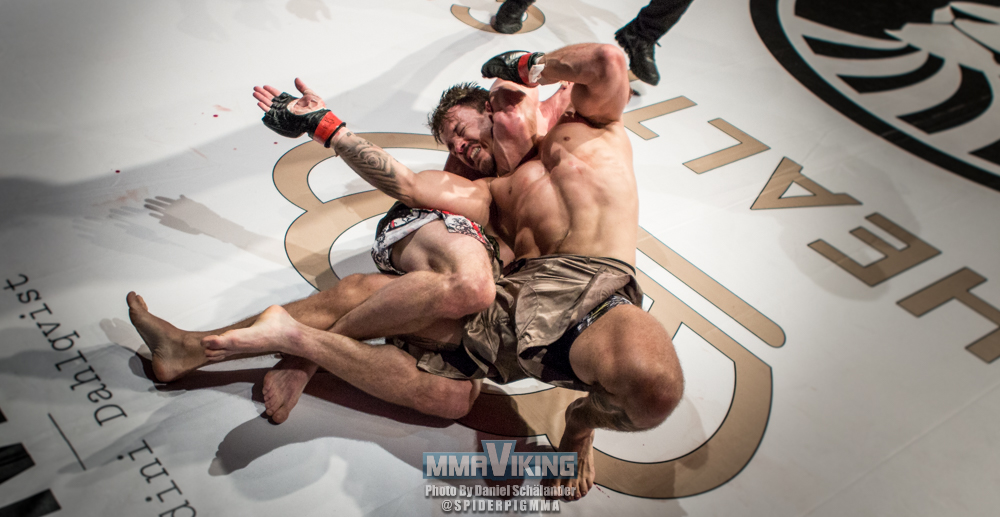 9. James McSweeney (18-15, UK) vs Fernando Rodrigues JR (11-4, Brazil) – HWT Title Bout
Round 1 – The Brazilian starts with a couple of low kicks. Then they start to exchange low kicks. Rodrigues urges McSweeney to get going as they stand in front of each other waiting for an opening. A rather uneventful first round with very few punches thrown and even fewer landed.

Round 2 – McSweeney starts of the round with a high kick that misses the mark. McSweeney is starting to pick up the pace of his offense. Rodrigues matches his opponents pace. Both throw heavy high kicks but they get mostly air. A rather uneventful round with a silent crowd in Cirkus, Stockholm. 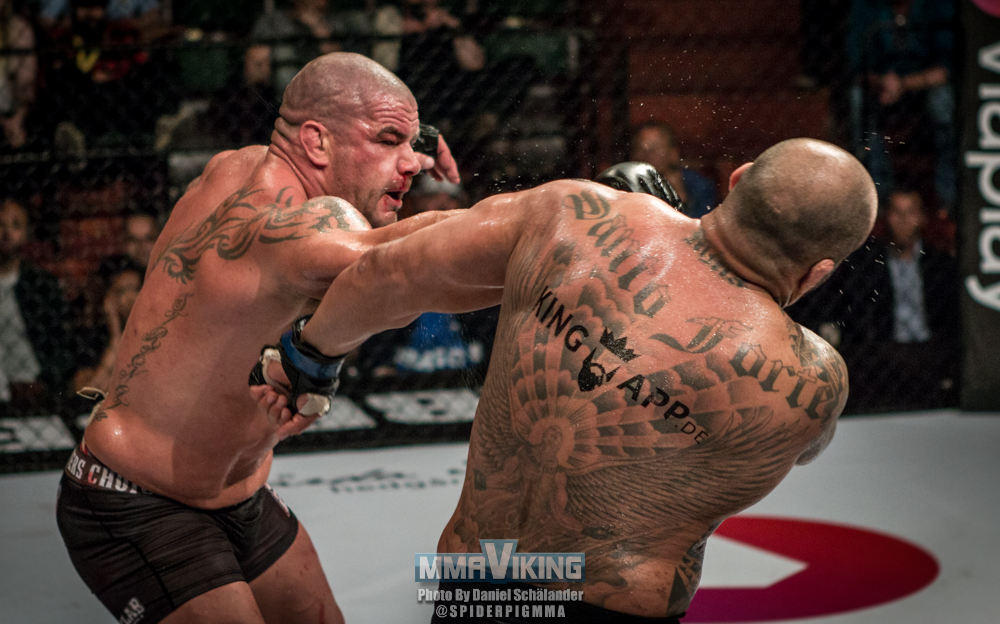 Round 3 – Both fighters are staying just outside of range making for a fight with many swings and misses. The otherwise patient crowd in Stockholm is starting to urge on the fighters to make something happen. The fight goes the distance. 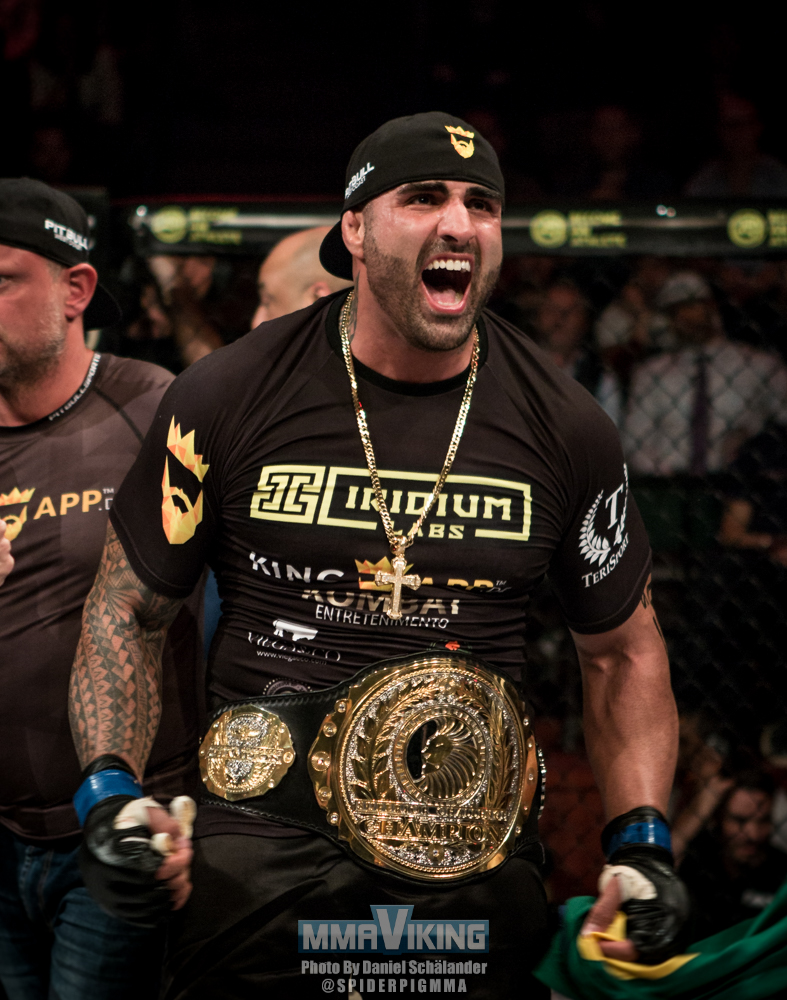 10. Martin Akhtar (10-5-1, Sweden) vs Ryo Ryo (7-3, Japan)– – Main Event
Round 1 – Ryo in the karate stands starts to attack with kicks and switches stances back and forward. Akhtar has the centre of the cage. Akhtar throws Ryo to the mat and stops himself from launching a kick to his grounded opponent. Akhtar signals to Ryo that he wants to continue standing. Ryo takes the fight to the canvas and get to dominant position. Akhtar this to go for a triangel choke but it isn’t tight enough and the Japanese fighter get out and improves his position. Ryo gets Akhtar in a tight rear-naked choke but the Swede refuses to tap. Ryo changes grip but Akhtar does not give in and in the end Ryo abandons the choke.

Round 2 – The fight goes to the ground early to a stale mate for a little while. Ryo looks for the armbar but can’t get it. Akhtar decides to keep the fight on the mat even though Ryo has been more successful in this realm. Standing Akhtar connects with a elbow and Ryo is rocked. Akhtar looks for the finish but does not succeed in finding an ending shot. Akhtar goes for the takedown and gets stuck i a triangle choke he rides out til the end of the round.

Round 3 – Both fighters are really tired but Akhtar seems to be the fresher of the two. This is most obvious when Akhtar, who spent the better part of his professional career in the stand up arts, successfully takes Ryo down at will. Akthar goes for a leglock but the Japanese fighter gets out with little effort. Ryo secures top position and works his way to mounted position. Akhtar works for a kimura but Ryo defends from top position. Even if Ryos arm seems to be in serious trouble he is cool as a cucumber and gets out. 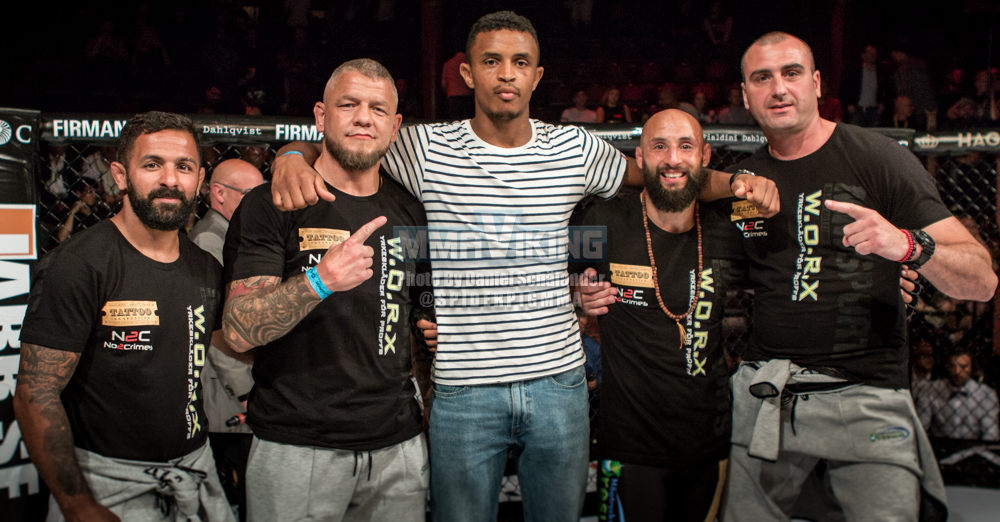