MMA Viking talks to George Sallfeldt, president of the Swedish MMA Federation, about the state of MMA in Sweden and when the UFC might come come back. He has been the president of SMMAF since taking over the post from former president August Wallén in early 2011. Sallfeldt had a prominent roll in last April’s UFC event in the Ericsson Globe Arena.

Hear him talk about his experiences of the event and of the further possibilities of another UFC event in Sweden in 2013. 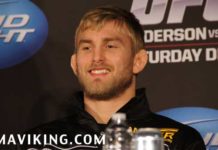 Gustafsson Versus Mousasi Approved for 5 Rounds; Title Fight Next?

Gustafsson Versus Mousasi Not Yet Approved for 5 Rounds