Once planned for Vantaa in September, Cage 27 now moves to Turku in a card of Finnish vets and hot prospects.  Turku will now host the November 8 card with FinnFighters Gym standouts Timo-Juhani Hirvikangas, Juho Valamaa, and Teemu Packalen.  Also seeing action will be Mikael Nyyssönen of MMA Team 300 and Aleksi Nurminen of RNC Sports Club. 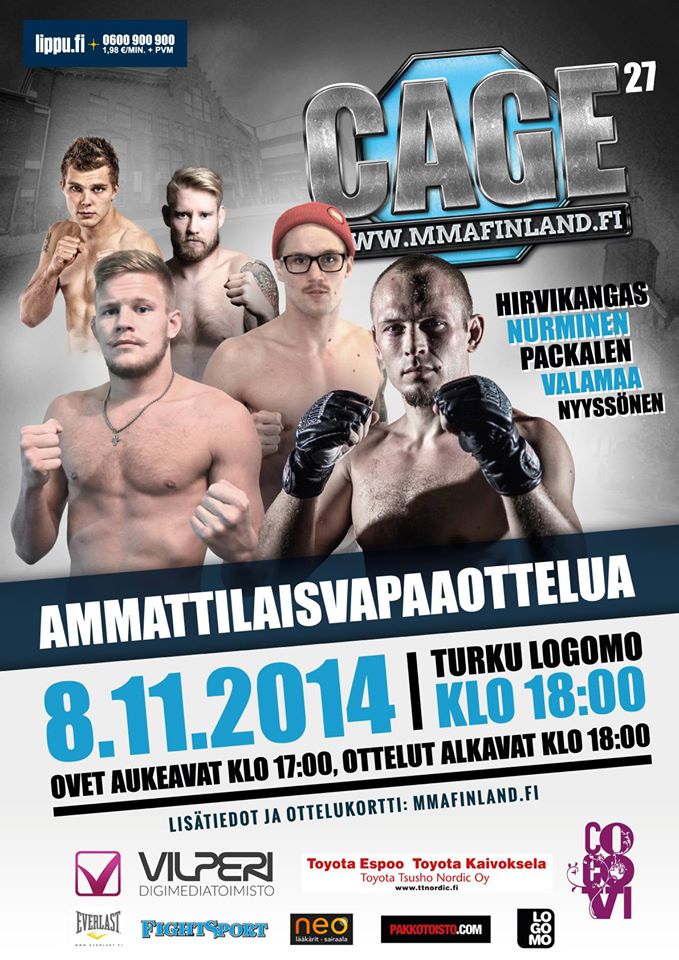 The 30-year-old Hirvikangas (9-2) is currently on a four-fight winning streak finishing all his opponents during that run, including a recent TKO stoppage against Tymoteusz Swiatek last April. With the first round finish, “Tipi” captured the Cage bantamweight title in the process, which he will defend in Turku.

Meanwhile, Valamaa (6-3) lost his last bout by decision against Johan Vanttinen in June in a close three round war. He is 2-2 in his last four outings, but has a talent for finishing as of his six wins they were all finishes.

Prospect Packalen, 27, has beaten all five of his opponents including a brutal elbow TKO finish over Sebastian Fournier at Cage 26 in his last fight. The Turku based fighter just won the No-Gi Finnish championship.

Nyyssönen, hailing from Tampere, is also undefeated in his six lightweight tilts and last saw action in April for Cage 26, winning via an impressive rear-naked choke submission victory over Viktor Tomasevic.

The youngest of the batch, the 22-year-old Nurminen comes back to the pro ranks after winning his IMMAF World Championship gold medal.