Sweden’s Fernando Gonzalez (7-1) will be facing Poland’s Albert Odzimkowski (10-3) on the Wieczr Walk R8 card on June 10 in Kraków, Poland.

Gonzalez competed at We Love MMA 24 last October, where he won by decision over Sebastian Reimitz. Before then he was injured and out of action for over 2 years, and again.  He was pulled off a showdown in Cage Warriors with Mohsen Bahari earlier in the year.

The Allstars Training Center fighters only loss was a split decision to Ryan Roddy back in 2013 at CWFC Fight Night 9.

Odzimkowski stopped Emil Weber Meek back in 2015 and has faced many top fighters including UFC vet Mickael Lebout.  He is on a two fight winning streak. 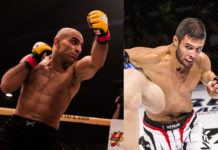