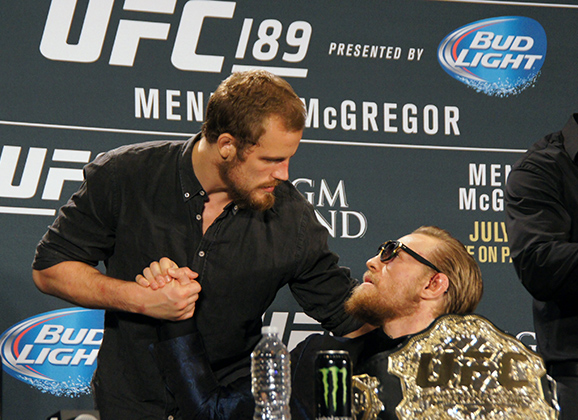 Gunnar Nelson will step into the cage against Demian Maia at UFC 194 on December 12th in what is being seen as two of the best grapplers in the UFC clashing. The UFC announced the bout today which will take place at Las Vegas’ MGM Grand Garden Arena.

What a fight!! @demianmaia vs. @GunniNelson official for #UFC194 on Dec 12. Ready for a jiu-jitsu clinic?! pic.twitter.com/jA4gpXglLc

“We obviously don’t know about Vegas yet but Gunnar would very much like a place on the UFC 194 card.” says Halli Nelson, father and manager, to mmaViking.com about Nelson’s wishes before the fight and location came together. With Gunni’s teammate Conor McGregor already headlining the same UFC 194 card against champ Jose Aldo, Nelson is a perfect addition to the card. It will be the 3rd time that the SBGi fighters will be in the Octagon on the same night.

With the Mjölnir fighters recent win over Brandon Thatch, he comes into the bout ranked as the #11 ranked welterweight.  Nelson with a 14 win, 1 loss, and 1 draw record is back again with buzz as a future title contender and a win over the former middleweight contender could get him closer to a title shot.  The 27 year old is also now 5 and 1 in the Octagon and looking for his second straight win in 2015.

Maia is also back in top form. The 37-year-old Brazilian recently dominated Neil Magny in Brazil in August, and now has a three fight winning streak.  He has a 21 win and 6 loss record, and holds a win over common opponent Rick Story.