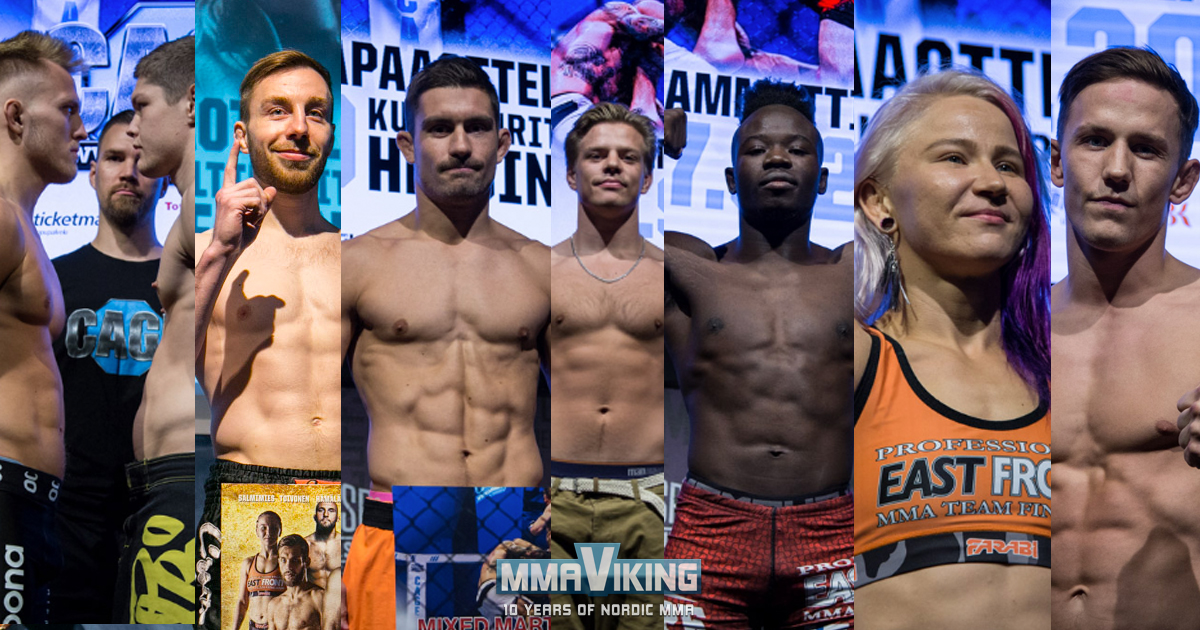 JOEL AROLAINEN VS BJARKI OMARSSON
The first Icelandic MMA fighter to ever fight in Finland enters the cage first with his Mjolnir gear on. Joel looking confident coming into the cage. The Finn in looking to get a take-down to start, but Bjarki defends well. Joel goes again for the leges, but Omarsson is super quick to snatch a no arm guillotine, but Arolainen defends quickly, and some hih-level grappling from the young fighters, and the Finn dives in a double-leg and nearly finishes before Omarsson switches. Joel in on the legs again, but is punished by a knee and now Bjarki cranks a guillotine and gets the finish via tap. Omarsson celebrates by jumping on the cage.

First round submission at 3:30 for Omarsson.

Maratbekov shows his speed as he misses big on a punch and a kick, but lands a flying knee and strike. Tuomas tries to get the fight to the ground, but ends up getting his back taken. Two real strong and explosive fighters. Argen landing some good punches as the Finn tries to escape. Back on the feet with a minute left and now Grönvall gets the take-down.

Good left hand lands for Argen, as Tuomas has troubles getting this fight to the ground, and eventually finds himself on the back after another failed take-down. The tide is turning as Maratbekov lands more and more damaging punches. Tuomas breathing really hard between rounds, and Argen himself decides to keep seated on the mat before the final frame. Tuomas can’t get his offense going, and Argen even shoots in to finish a take-down and takes back on two occasions.

LEONARDO CASOTTI VS ALAR HUTROV
Casotti used power punches and speed to damage a tough Hutrov for three rounds. The Brazilian even took back at one point in the bout, landed a spinning punch, and nearly landed a front flip rolling kick. At the end, it was Leonardo that was victorious on all three score cards.

Wow, Sofiane looks like a body builder. Lampinen very strategic in his attack, but the Brazilian is looking for a stoppage and misses with a big right. Now the visitor brings the fight to the ground and Toni is stuck on his back, but lands a few elbows and an upkick. Ah, a slick reversal from the Finn and he wastes no time, and moves to full mount and lets a bunch of elbows go until the round ends. The Finn gets the fight to the ground again, and even takes back before Sofiane rallies and lands some strikes when back on the feet. A series of punches and Lampinen is hurt bad. The visitor moves into full mount, and lands more punches for a stoppage. Benchohra wins by TKO.

Don’t approve of the overweight Rabei, so props to Repo so taking the fight. Repo gets the take-down in the clinch. Moving to full mount, and then a back take. Good grappling from the Finn that even threatens with a rear-naked choke.

Rabei lands some good rights to start the second round, and Tuukka has to be careful here. Eventually it is the Finn that takes the fight to the ground again, where he has the real advantage. An eye poke had Tuukka taking a break, and seems he pulls guard late to try and stay safe on the ground, but unfortunately the overweight fighter jumps into full mount and lands several punches on top. But overall, a good performance for Tuukka, and winner by unanimous decision.

Silander looking really relaxed her, dodging punches. In the clinch, the “Hulk” spins the Brazilian to the ground for a take-down. The two scramble and the fight ends up on the feet at the end of the first.

Silander has a few exchanges, and defends a take-down. The Finn moves to snatch an arm in guillotine, and it is tight. And just like that it is all over. Second round submission win for Silander.

Suvi locks up a head and arm and is just ragdolling Berchel. After squeezing it on the feet she throws Berchel down to the ground. Trying to lock up a side-choke submission, but just can’t get it against the very flexible Berchel.

The Finn is just relaxed on the feet and in the clinch. The Rock Chick with some good knees in the tie-up in the second, and again going to the head and arm hold.

A hug to star the third round. Good head movement from Suvi that is able to land some jabs and lock-kicks. A flurry at the end, but clearly another round of Salmimies and another hug to end the fight.

Winner by unanimous decision Suvi Salmimies in the co-headliner.

Walls hair ads about 5 inches to his height, but he will likely still be shorter than the lanky Ribeiro. Walls having trouble finding range against Ribeiro, but is controlling the cage and looking for a counter-punch. A nice left jab with one minute left for Walls. A slip and punch causes the Finn to fall down, but up quick. Ribeiro lands a good calf kick.

Nice combination for Walls as he follows up to a clinch, but several elbows to the back of the head has the referee jumping in to stop the action. The two start swinging, and an eye poke stops the action for the Brazilian to be looked at. After the delay it is Alexandre that gets a body lock and takes the fight to the ground and quickly moves to a body lock on the back.

Alexandre fires off some kicks to start, but Walls wants it on the ground and shoots in. Eventually Walls is on top, but Ribeiro rolls for kneebars and throws up triangles, but the Finn defends well. To the feet, but Edward holds on to a single leg. Ribeiro celebrates, and Walls is tired. But, could go either way.