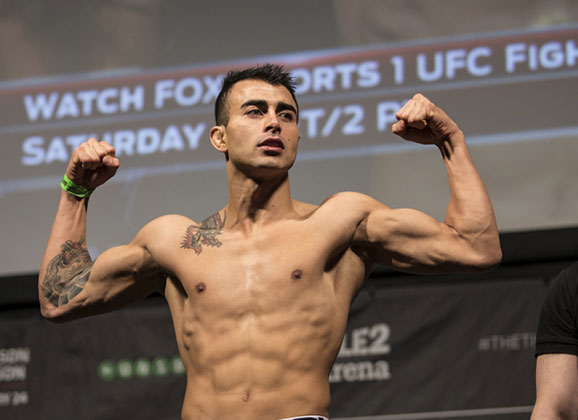 Fresh off one of the most spectacular UFC debuts Makwan Amirkhani will now make his return to the Octagon in Berlin to face Mexican Masio Fullen (10-4).  MMAViking.com has confirmed “Mr. Finland” will be on the upcoming European UFC card, and since the story was shared by Amirkhani on his Facebook page.

Amirkhani comes into the fight with an 11 win and 2 loss record, and is coming off the 8 second win by flying knee at UFC Gustafsson versus Johnson in January. The Turku based fighter has recently started his training with Allstars Training Center in Stockholm, with other UFC fighters such as Niklas Backstrom who will also be on the UFC Fight Night “Gustafsson vs. Teixeira” on June 20.

Fullen is a 27 year old out of Mexico and was most recently in the Octagon this past February where he beat Alex Torres by split decision at UFC 184. The member of TUF Latin America is on a three fight winning streak.  He now puts in time in San Diego at Alliance Training Center.