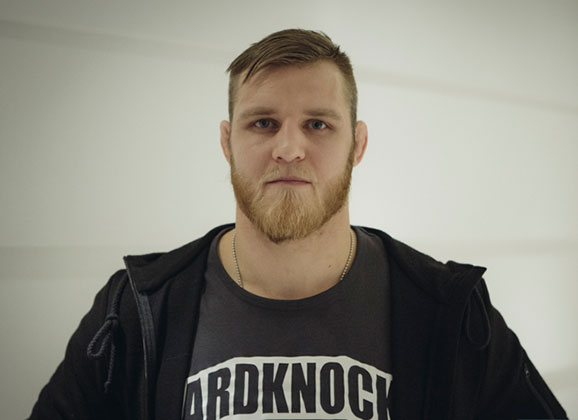 Marcus Vänttinen (24 wins, 5 losses, #3 Nordic ranked LHW) is ready to step back into the cage, but it won’t be to defend his Cage Light Heavyweight strap.  After being out of action for over a year with injuries “Caveman” will fight on the Cage 29 card as heavyweight.  “I’m excited to go up to heavyweight and see how it works out.” says Vänttinen to MMAViking.com during his recent visit to Stockholm to see the big UFC event.

“I’ve been analyzing my style, and I’m not as fast as the top 10 guys in the light heavyweight division” says the Finn that looks to step into the February 28th event in Helsinki weighing around 237 lbs./107 kilos.  The plan is to use his cardio and take advantage of his athleticism says the Hardknocks Helsinki fighter that also represents Team Unibet.  “I’m pretty sure I’ll do good against the big guys.”

Vänttinen at only 27 years old has been a long time fight veteran, fighting pro since 2004. The Finn had been a staple of Fight Festival and more recently Cage. “I’ve been thinking about it for a long time” about the move up a weight class after year’s of cutting 10+ kilos to drop down to the 205 lbs mark.

“If that goes well, and I feel good… I’m sure I will get to the biggest stage.” says Vänttinen who eyes a UFC contract after this bout. “My team believes in me, and I believe in myself.”

The former Bellator fighter has put together a three fight winning streak after losing in March of 2013 in a questionable stoppage at Battle of the Vikings.  The top prospect once had an 11 fight win streak.

Caveman’s opponent has not been announced for the upcoming Cage card in Helsinki.