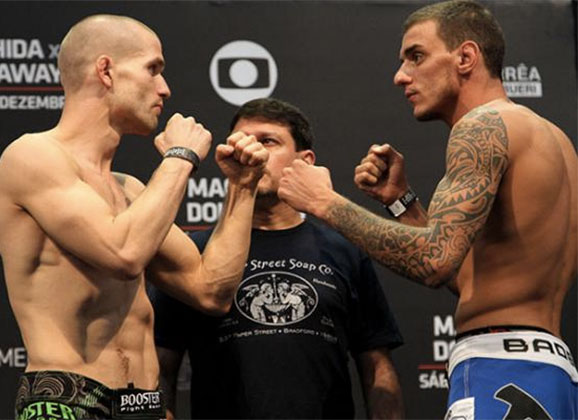 Tom Niinimäki (21-7-1) will face Brazilian Renato “Moicano” Carneiro (8-0-1) Saturday night in Brazil at Jose Correa Arena in Barueri, Sao Paulo, Brazil.  MMAViking.com will report on the action of the Stoneface bout live below for the UFC Fight Night, which is headlined by the light heavyweight bout between Lyoto Machida and CB Dollaway.

It is hot inside the Jose Correa Arena at 35.5 degrees celsius with 80% humidity, which has had its impact on the early bouts of the night with fighters getting tired in the second and third rounds.

“Moicano” is the first fighter in the cage. He enters looking very relaxed for his UFC debut. Niinimäki walks in with a black Jaco shirt, which matches his left black eye that is visible on Stoneface.
Round 1
Left kick up high comes first from the Brazilian, but it is blocked by Niinimäki. Both fighters are cautious early, but Stoneface looking for an inside kick right hand combination as he attempts it twice. Lead uppercut from Tom, but the long armed Moicano is able to counter. Both fighters looking for one punch to end it as they swing at the same time with all their might. Niinimäki lands a good right kick to the lead leg. Moicano now mixing up kicks high and low, and the reach is making a big difference in this one. Niinimäki aiming to damage the lead left leg of the Brazilian that is often the target here in the first. The left kick of Moicano comes quick and often, both to the body and up high.

One minute left in the bout. And a solid right hand from Niinimaki, but the speedy Moicano counters with punches immediately. Moicano seems to be the quicker of the two as he catches a kick from the Finn, and kicks out the other leg.

Round 2
Good low kick from Moicano, and another one from the Brazilian. Overhand right from Moicano and another one lands, and the quicker Brazilian is showing his power and speed. Niinimäki staying in the pocket, but no significant strikes. A laser right kick low. Two minutes into the round, but Niinimäki just hasn’t found an opening to attack.

Moicano is very relaxed and just sitting on his punches, as the Finn seems to be reaching a bit. Three minutes into this round, and now the Brazilian tags Stoneface. A right hand sends Niinimäki backward and the fight hits the floor as Moicano jumps on top. Now full mount from the Brazilian by the skilled grappler, but Niinimäki stands up against the cage to try and escape quickly. Moicano gets back and brings the fight down to the ground and locks on a tight body triangle. The Brazilian grabs a rear naked choke, and there is the tap. It is over. Renato Carneiro is the winner, and Stoneface congratulates the Brazilian.