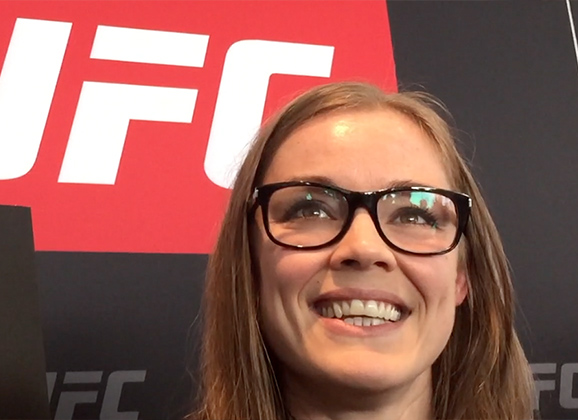 Anna Elmose (3-0) will step into the Octagon for the first time this Sunday, but before then she talks to MMAViking.com in Rotterdam at Media Day.  “When they figure out I’m happy” they are interested says “Panda” about not fitting the stereotypical fighter image that has given her so much mainstream media attention in Denmark.

I’m just going to do what I do, and go to town.

“I have my husband all the time, I have my coach all the time… it’s perfect” says Elmose about being married to Rumble Sports head coach Tue Trnka, who will be coaching cageside along with training partner Jonas Magard.

Elmose finds herself inspired by Damir Hadzovic’s most recent experience, when went to-to-toe versus highly ranked Mairbek Taisumov in his UFC debut. “I’ve been wearing his UFC t-shirt, because I am so proud of him.” says the bantamweight that herself will face an experienced and decorated Germaine de Randamie in her UFC debut.  “He showed the world that he is a world-class fighter.”

“I know what I can do, I just want to show it.  If I get KO’s, I fought a world class kickboxer in the UFC.”