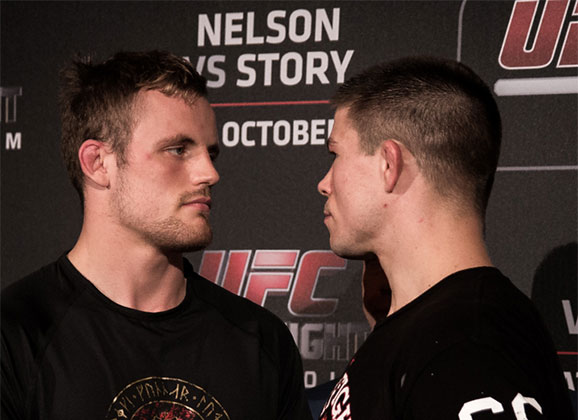 Gunnar Nelson will look to win his fight straight in the Octagon and keep his undefeated record as he meets grizzled vet Rick Story in the headliner of ‘UFC Fight Night 53’.  MMAViking.com talked with both fighters about the matchup at the Grand Hotel at media day in Stockholm.

“I would look forward to fighting him” when asked about fighting Rory Macdonald, the other favorite on the other headliner of the two UFC card Saturday.  “There is a huge momentum around SBG” says Nelson about his training partner and team after Conor McGregor that he is hoping to keep riding forward.

“I had to hear it twice before it sunk in…. a headliner, it is awesome” says Story when he got approached about the opportunity. “This looks a lot like home” says the native fighter from the state of Washington.