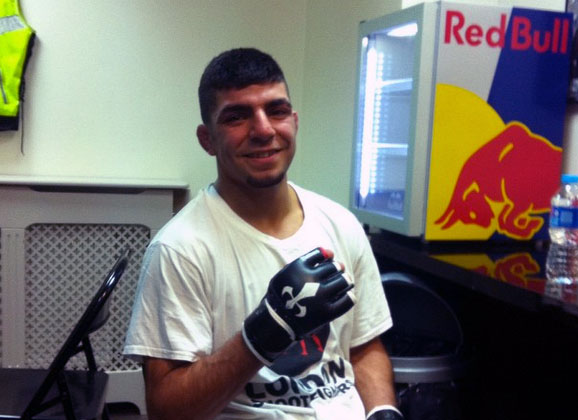 Amir Albazi (5-0) stepped in on just days notice to fight Salih Kulucan (4-3) at Ultimate Challenge MMA (UCMMA) 41. The Sweden raised fighter, born in Iraq and now living in London, has not fought professional MMA since October of 2010.  Albazi took the fight at bantamweight, although his fighting weight is as a flyweight.  The event went down at the Troxy in London, England.

The world champion (blue belt) in Brazilian Jiu Jitsu has been looking to get back into the cage this year, but didn’t actually happen until today. His older brother Omid, who will be featured later in the month at Superior Challenge 11, reported the news of the victory, saying on Instagram “Amir won his fight in the 2 round by kimura and broke his opponents arm.”  The winner takes to Facebook to describe his own win, “”I almost got the fighter to tap out on the first round by an armbar; (hyperextend his elbow) before the bell rang. Second round I just wanted to finish the fight because I was warm and confident that I still got it….. from there it was all ground work ending with an inverted triangle position on top of him meanwhile executing a modified kimura.”

Kulucan is 22 years old and fights out of MMA Terror Squad in London.

“I have no words to explain my feelings after yesterdays win because I’ve been waiting to fight in MMA since 2010, 4 years, almost 4 years without a fight. The biggest win was actually to prove myself that I still got it but also my family, trainers, supporters, fans etc. ” – Albazi

Albazi now trains at London Shootfighters.  He developed his skills as a teenager at Fightzone Stockholm.  With today’s win, he improves his record to 5 wins and 0 losses.