MMA Viking will on location in Turku, Finland for the Cage 18 card on March 3.  Fights should start around 19.00 local time in Turku.  Visit this page for results from each of the bouts: 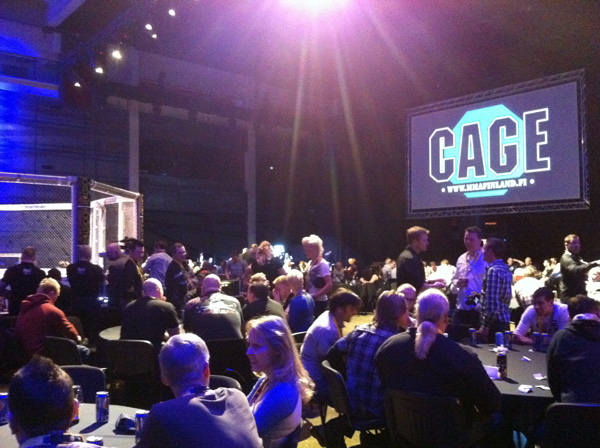 Juha Saarinen, (92,2 kg) FFG vs Mikhail Zayats, (92,5 kg) Alexander Nevsky Club Russia
Saarinen comes out to a very warm welcome to the jolly crowd looking for a good fight to take the sting out of two consecutive Finish losses.  Zayats shows his power with wild flurries, while Saarinen looks for a clinch and control.  Zayats shows some flash with a backfist that lands, and eventually uses his power to take the Finnish fighter down where he tries to punish with punches and elbows.

The Finnish fighter is just back from training with the Blackzillions, and the local crowd is giving him all the encourage they can as the second round starts.  A leading left hook is the punch of choice from the Russian, that keeps the distance between the two fighters.  Zayats looks for double-legs to bring the fight to the ground, but Saarinen’s sprawl keeps the fight standing. Big power punches for the M-1 veteran as he wobbles the Finn, again getting the fight tot he ground where Saarinen pulls full guard.

Blood is pouring out of the local fighter’s face.  It looks close to the eye, and the bout is called, with no complaints from Saarinen or the local crowd.

Ville Räsänen, (76,7 kg) MMA Imatra vs Valdas Valancius, (77,0 kg) The Knight of Plunge Lithunia
Back and forth to start the 1st round.  Both fighters looking for damaging blow.  The late replacement Valancius looks to end the fight mid-way in the 1st with big looping blows that has Räsänen on skates.  Desperate to stop the damage, the Finn barrels in for a double leg takedown to bring the fight to the ground to finish out the round.

Again the two go out it in the standing war.  Räsänen’s nose is bleeding as he feels the blows of the Lithuanian taking it’s toll.  Late in the 2nd the Finn ties-up with his foe, and is able to find a trip to bring the fight to the ground.  The Finn quickly moves to mount and punishes with punches and elbows to finish out the 2nd.  Could hav been a stop.

Right leg kicks are the new tool for the Finn that looks to punish his opponent with consecutive blows, but the Lithuanian fights back and lands a huge left hook.  He follows up with looping punches to the head brining a stop to the bout.  The ref steps in for a TKO.

Back and forth first round. Pualakka taks Musoke down, but Musoke gets back up. The two seem evenly matched, and spend time in the clinch.

Second round again the two fighters end up in the clinch again. In the tie, Musoke pulls a tight guilitine, but couldn’t finish the bout. He ends up on his back, and fights to get back up.

Musoke and Puolakka pick up the pace in the 3rd round. Eventually the fight finds its way to the ground, where the Swede is able to submit the Finn with a front choke (10-finger guillotine) that pus Pualakka to sleep. The bout is stopped at 1:39 in round 3 for the winner Nico Musoke. Musoke and Pualakka show much respect in the end, and Musoke thanks the local crowd for their hospitality.

They hype train starts as Amagov enters. GB Gym / Team MMA Finland fighter looks calm in the cage. Looking confident on his feet, the Finland transplant looks quick on his feet. Amagov looks for high left kicks, and flying knees. Eventually the GB Gym fighter ties up the late replacement Kabalinov and tries to sink in a guillotine, but can’t quick lock it in. Back on the feet, and Amagov looking for a YouTube worthy KO with high left kicks, but not enough to KO his opponent.

Amagov’s offense in round two consists of left high-kick, flying knee, and then to a double-leg take-down. Eventually Amagov gets the fight to the ground and ends it with a heel-hook at 3:25 in round 2.

The fighter celebrated with some round-kicks to the fence, then refuses to take pictures with the ring girls, opting to take some pictures with his corner.

Makwan Amirkhani, (69,2 kg) FFG vs Aleksejs Povulans, (68,8 kg) The Knight of the Plunge
Amirkhani comes out in King Mo style with 10 dancing girls –they look like fembots…. and that’s a good thing.  Loving the attention the Finn takes it all in with a dance before jumping into the cage.  The local backs up his grand entrance with a dominant round one, with take-downs and ground and pound.  An upkick from Povulans with both fighters grounded brings the bout to a halt.

Second round is more of the same, with Amirhani bringing the fight to the ground and keeping control of the bout.

The FFG fighter wins in a 2 round decision.

Juho Valamaa, (76,7 kg) FFG vs Jussi Pulkkinen, (76,8 kg) MMA Imatra
First part of bout is dominated by the aggressive Valamaa.  The bout is finished with strong ground and pound in round 1.  Rare fight between two Fins.

Toni Tauru, (62,9 kg) MMA Utti / Team Eastfront vs Oleg Khramov, (62,4 kg) The Knight of Plunge, Lithunia
Dominant round for Tauru and round ends with him with a triangle from the top, raining down punches.  For some unkown reason the referee stops the bout with little time left in the round, and tries to re+set the fighters, but the round ends.  Lots of confused faces in Turku.

Wicked knees to the head of Khramov in round 2, and he takes top control of the Lithuanian fighter.  As the round progresses, Khramov is able to regain composure and eventually end the round on top.

After the end of two rounds Tauru is given the decision in this amateur bout based on damage.  Fun bout to get the crowd into the night of MMA.

Aleksi Kainulainen (67.9 kg), FFG vs Arvydas Zilius, (68,0 kg) The Knight of the Plunge, Lithuania
Evenly matched first round, with Kainulainen looking for take+downs.  Exchange in  second round leads to TKO for Arvydas Zilius.