Iceland’s Magnús “Loki” Ingvarsson (1-0) will return to the cage once again this Saturday at Caged Steel 21. The BJJ brownbelt will take on Percy Hess (0-2) at Caged steel 21.

Hess has fought most of his amateur and pro career bouts in Caged Steel so is a well-known competitor to fans. Hess has yet to make it out of the 1st round as a pro. He was finished in his sole two pro fights to date.

The Reykjavik MMA fighter made his debut in the British based promotion’s last event when he submitted Gav McGee (1-1) in the very first round. Ingvarsson looked very promising in his pro debut as he made easy work of McGee.

Ingvarsson was successful as an amateur. He made it to the 2016 IMMAF European championship semi-final where he lost a very tight split decision which he could have arguably won. Prior to that loss, he picked up 3 wins in a row, all finishes. Here is his most pro debut from earlier this year.

Icelandic prospect Magnús Ingi Ingvarsson made a professional debut to remember as he locked up a fight ending triangle choke in the first round, submitting the dangerous Gavin Mcgee.Sponsored by Toprank Sport.

Ingvarsson will not be the only Nordic fighter on the card, he will be joined by fellow Iceland fighters Benedikt Benediktsson and Thorgrimur Thorarinsson. Both men will compete in amateur bouts on the night. Thorarinsson will challenge for the Middleweight belt on the night. 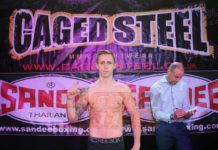