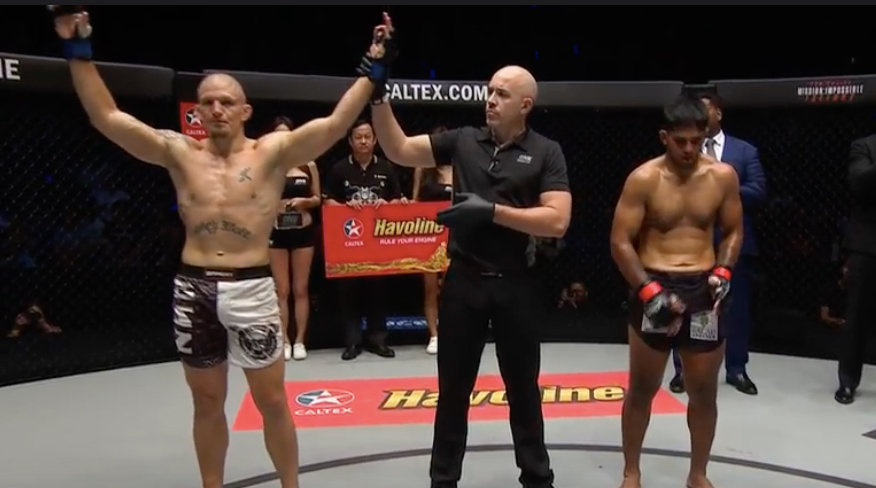 Zebaztian Kadestam (10-4) stopped home town hero Agilan Thani (8-2) today at ONE: PURSUIT OF POWER.  It was the main event for the Kuala Lumpur event and the Swede delivered.

The Swede avoided take downs early, but two minutes in Thani did get it to the ground but the Swede was quick to bounce up to the feet.  Impressive grappling from Kadestam early.  A spinning kick low from the Pancrase MMA fighter that is bringing a lot of new tools to the cage.  Flying knee then overhand elbow combination at the end of the first to dazzle the crowd, but before the bell the “Bandit” was a bit overconfident and had his hands down as Thani landed an big overhand right that may influence the judges as they tally their card.

Zebaztian began to take over the fight in the second and third round as he pushed forward, landing a variety of punches and devastating kicks low.  A desperate Agilan tried over and over to get the fight to the ground, but the Swede would not let that happen again, defending and punishing with knees and elbows.

“I broke my hand in the first round, so it took me a while to get things going.” – Zebaztian

It was a clear time to stop the fight as the Swede just punished the home town fighter.  A knee and three elbows was the final damaging combination for the TKO.

The Swede came up short to Ben Askren’s relentless ground attacks in his title match in his last fight, but now has regained confidence.  “When i beat thani i will get Another date and most likely fight for the belt.” said the Swede to MMA Viking before the bout, and it seems this is what is next.