Norway’s Kim Thinghaugen (6-5) will fight Dom Colossus (0-2) at UNITY Fighting Championships going down April 7 in Darlington, England.  “I am injury free now and will look to make a statement and set the standard for 2018.” says the Vallhall Gym fighter to MMA Viking.

“Kimbo” faced Sweden’s Simon Sköld (8-5) in his last bout at Superior Challenge 16 in December, where he was caught early and stopped.  “In my last fight, I went in there confident even tho I was dealing with injuries. I feel I am a fighter with a good overview. But dealing with the injuries in my last fight it affected my reaction time and my overview. Simon capatalized on that very well with coming over the top with the right hand.”

“I will be more careful to keep a good eye on the opponent. And make sure I don’t get hit.”

Thinghaugen turned pro at Made4TheCage back in 2012 and won his first four out of five bouts.  The lightweight fighter has fought primarily in the UK, and got a bit of attention for being the first Nordic fighter to finish with a twister in a pro MMA bout.

“Stick and move” says Kimbo about his strategy against the “Lucifer” that has lost both of his pro MMA bouts. 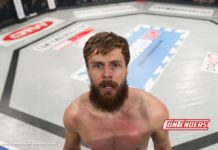