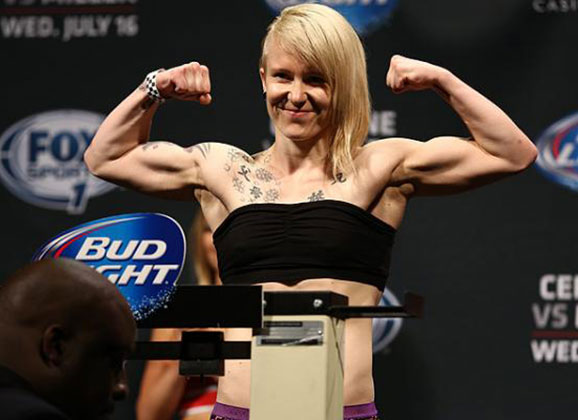 Finn Tina Lähdemäki and Brazilian Cláudia Gadelha kicked off the very first UFC strawweight fight in style on Wednesday in Atlantic City. The Brazilian was the biggest favorite to win on the card according to betting odds, but the bout showed the young and scrappy Lahdemaki wasn’t there to be an easy stepping stone for the grappling world champion.

“I think I did prove myself to everyone and showed that I do deserve to be here and I do belong here.” says Lahdemaki about her three round war, taking on the training partner of the former Invicta FC No. 1 contender.

The Brazilian is seen as potentially the best in the world, and was considered too big to be a strawweight on the TUF 20 show due to concerns about her making the 115 lbs. mark several times for bout on the reality show. While relatively unkown on the international seen –Lahdemaki has just a handful of fights that have all taken place in Finland– took a huge step up in competition.

While Lahdemaki found herself on her back in the first round, the Finn highlighted both skill and determination to fight off the Brazilian’s submission attempts from her back. On the feet and on the ground, the strawweights battled, showing that the matchup was not an easy way for Gadelha to get her record to 12 wins and 0 losses and a win in the eight-sided cage.

In the end, it was a spirited Lahdemaki standing showing world class cardio and determination in a unanimous decision loss (30-26, 30-27, 30-27), highlighting the UFC’s first-ever women’s 115-pound bout.

“Making history as the first straweight fight in the UFC! Had a great and tough fight and what’s most important had a lot of fun out there! Though it would have been nice to go home with a victory but you can’t always win, not even every time.” posts the RNC Sport Club fighter on Instagram.

Lahdemaki now sees her record drop to 5 wins and 1 loss, but the bout served well for the debuting fighter that should earn another opportunity for an Octagon return.