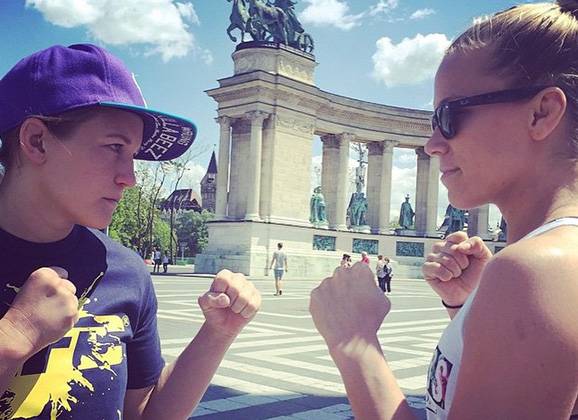 Linn Wennergren lost at the Hungarian Fight Championships 9 tonight.  The Swede will faced American Katlyn Chookagian in the 4 women one night tournament.

PLAY-BY-PLAY
Chookagian enters the cage first.  Wennergren enters the arena to Lenny Kravitz’s American Woman, which makes me think they mixed up the music.  GBG MMA’s Joakim Engberg is cornering the Swede.

Round 1 : Both fighters try to strike early.  Taking their time.  Wennergren clinches up, but lets go.  Slow first half round.  Nice five punch combination for Linn that seems to be getting the best on the feet.  The American shoots for a takedown, but a nice sprawl.  Back to the feet for the last minute.  Pace is picking up.  BIG KNEE from the American, and Wennergren is hurt really bad.  She is dropped, but saved by the bell.

Round 2 : Wennergren emerges and immediately begins applying pressure to Chookagian. Chookagian is pushed against the fence where the two struggle for position. Chookagian attempts knees, but Wennergren breaks away and lands a punch. Chookagian takes the center of the cage, and throws two consecutive spinning kicks, but they’re all sizzle and no steak as they fall short. Once again the Swede pressures her American opponent to the cage and the two warriors vie for position. Wennergren lands a knee up the middle then backs off so that she may take the center of the cage and use the position to push forward once more. Wennergren backs Chookagian to the fence and hits her with a leg kick and a combination to the head. Another blitz from the Swede ends the round with Chookagian’s back to the wire.

Round 3 : The fighters emerge from their corners and Wennergren again takes the center. She pushes forward and lands a kick to the body of her foe. Another to the leg for the Swede. The American hits here with a left-right-left, then a stiff jab, but she can’t keep the Swede from pushing forward and Wennergren lands another kick to the body of the American. Again. The American swings a lazy uppercut that doesn’t land and the Swede hits here with a left-right-left to the head for her trouble. The American’s back is to the cage and she lands a successful string of kicks. A hook to the body misses for the Swede. A solid left hook lands for Wennergren but she misses with a winging right. A push kick lands for Chookagian, then a spinning back kick. Wennergren will have none of this, and clinches once more against the cage. The two break and Chookagian throws a spinning back kick that lands on the gloves of the Swede, but off-balances the American. She snaps back to her feet, but this lapse of focus puts Wennergren right on top of her again, and she is pushed to the fence where she eats an elbow. The two break free and as the buzzer sounds, Chookagian lands a kick to the body of her Swedish opponent.