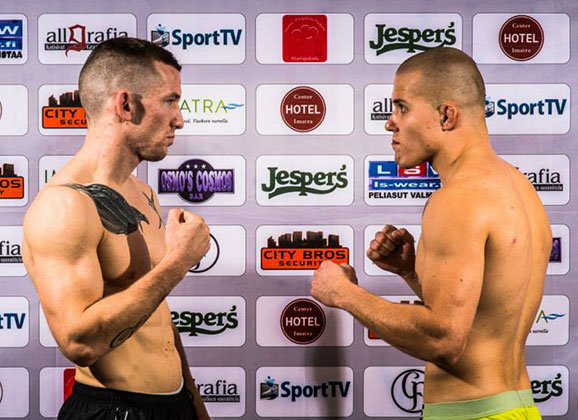 The Careleia Fight 10 card goes down this Saturday in Imatra Finland.  The card is headlined by Finn Antti Virtanen, MMA Imatra, and Swede Jonathan Svensson, Pancrase Gym.   The co-headliner is an international bout between Jonatas Novaes, CounterStrike Chicago out of Brazil versus Franceäs Nayeb Hezam,CrossFight Paris.  The 8 fight professional card’s results can be seen below.

Aleksi Savolainen MMA Imatra, Finland vs Jerry Kvarnström, Turun Urheilijat, Finland (69 KG)
Round 1
Kvarnström with a take-down early in the round, and he is on the offense. Looking for submissions and all over Savolainen. He finally locks on a no arm guillotine and it is tight. Tap from Savolainen at 3:33.

Jari Illikainen MMA Lappeenranta, Team EF, Finland vs Timo Suihkonen KKU, Team BP, Finland (62 KG)
Round 1
Illikainen takes control early and lands a lot of strikes which forces Timo to search for a takedown, as he does he gets countered and Jari Illikainen takes mount! The Lappeenranta fighter is active on top landning strikes and elbows, a quick switch to the armbar and the tapout is a fact.

Round 2
Halme now takes the center and is looking to mount an offense. He lands a sizzling straight right that gets Juhani to shoot for a sloppy double that Juuso counters with a guillotine attempt that isn’t successful. Afte a brief pause due to a groin kick the action is back and Aho takes the fight to the ground, if he can keep the top here he might win this round back. Halme isn’t having it though and scrambles and reverses Juhani and taking top position. Juuso gets a brief opening to take the back and does so while locking on a RNC, it’s tight and the fight is over!

Johan Vänttinen Helsingin Kamppailu-urheilijat vs Vaidas Valancius Knight Of Plunge Kaunas, Lithuania (77.1 KG)
Round 1
Vänttien takes the fight to the ground early and established top position. Valancius has guard but is pressed against the cage which is severely limiting his movement. Johan puts in the next gear from top guard, and that gear is filled with aggressive ground and pound! 30 seconds left as Johan continues to land strikes with his brother Marcus looking on and shouting instructions from the corner.

Vänttinen has won the first two rounds, can Valancius come up with an answer in the third?

Round
Third round starts the same as the third with Vänttinen bringing the fight to the ground faster than the speed of light and Valancius virtually has his back on the canvas before the start of the round. Valancius needs to find an answer to Vänttinens ground and pound. Vänttinen passes to side control for a brief moments before Vaidas recovers half guard. Vänttinen takes the back after a scramble and now ends up in mount! Elbows have oppened up the face of Valancius who looks like he is making a involuntary cameo in a horror movie. The pounding keeps coming before the referee decides he’s seen enough and puts an end to the carnage.

Winner by TKO in round 3 Johan Vänttinen

Jani Ridasmaa MMA Lappeenranta, Team EF, Finland vs Dagir Imavov Sausset Fight Team Marseille, France/Tsetsenia (74 KG)
Round 1
After a brief stint on the ground initiated by Ridasmaa, Dagir Imavov takes the Finn down for a short time. The fighters separate on the feet and Jani takes the center of the octagon. Imavov isn’t taking it though and fights to reclaim the center with some nice strikes. The round ends and it’s hard to tell who deserves to win it.

Round 2
Jani is moving forward with BIG looping punches, Imavov responds with a strike to clinch combo and seeks a single leg. The French fighter seems to want to have this fight play out on the ground but he’s having a hard time bringing it there as Ridasmaa is defending with brilliance against the cage. So far Imavov has this round, but the judges will be swayed easily if Ridasmaa can put forth a distinct attack. None of the fighters seem to be able to execute their gameplan at the moment. Round ends and I would say it’s more than fair to say that Imavov deserved this one.

Round 3
First round starts out even with a slight edge to Ridasmaa who is more active with the strikes. a power double is successful by the Finn but he can’t keep Imavov down for more than a few seconds. Less than half of the round left, the winner of these two minutes might very well be the winner of the fight. Jani has the center but gets shot with a double by Imavov who establishes the top position, that might have one him the fight. 1 minute left as Jani is searching for angles from the guard. Now Imavov stands up out of nowhere and it’s Ridasmaas turn to get the double leg takedown. He can’t keep The Fight Team Marseille figher down for long as Imavov get’s up with the quickness. Has Imavov done enough to sway the home judges in his favor?

Eeva Siiskonen MMA Imatra, Finland vs Inga Kaledaite, Knight of Plunge Kaunas, Lithuania (61.2 KG)
Round 1
Siiskonen catches a kick early and seeks the back, she gets it and seeks for the rear naked. Inga manages to turn the tables and gets on top, but only briefly before Eeva nails a flower sweep and gains mount. Inga is not accepting though and gets on top once more before being put on her back with Eeva in her guard, mad scrambles early on! The combatants get stood up. Siiskonen is the more aggressive fighter and is landing clean shots to the face of Kaledaite.

Round 2
Siiskonen brings the fight to the ground again but is struggling against a standing kimura attempt by Inga. Eeva finally gets out and looks to pass the half guard of the Knight of Plunge Fighter. Her attention suddenly changes from passing to smashing as she starts hailing down a swarm of evil intent in the form of Finnish sisu landing on Inga Kaledaites suprised face. Inga scrambles and the fight gets back on the feet. Out of the blue Eeva lands a concentraded dose of anger with a left hook that connects clean to the chin of Kaledaite and knocks the Lithuanian out! The fight is over and the MMA Imatra fighter celebrates joyously while Inga lays flat on the floor recovering before getting back to her feet.

Co-Headliner
Jonatas Novaes, CounterStrike Chicago USA, Brazil vs Nayeb Hezam,CrossFight Paris, France (75 KG)
Round 1
Novaes lands two very hard leg kicks to the right leg of Hezam. The Crossfight Paris fighter seeks the clinch then takedown and gets both. Noaves scrambles and claims to position, very swift move by Jonatas. The fight is back standing and Nayeb looks to close the distance with a shot, he isn’t successful and there is a paus after Novaes is poked in the eye. Both fighters are very explosive and the fight could end in every exchange. The round ends and it is too close for me to call a winner in this one. Possibly a slight advantage to Novaes

Round 2
Hezam moves forward and throws a spinning back fist before shooting in on another doubole, he doesn’t get it but he gets the clinch and manages to tip Novaes over and take the top. Hezam now working from half guard. Novaes goes deep with the half guard and gets a beautiful sweep! Hezam isn’t having it and takes the top control back, both fighters are very skilled on the ground. Nayeb now more aggressive with the strikes from the top and the corner of Jonatas is calling out for more activity by their fighter. Novaes listens and flips Hezam over, can he maintain top control for the last minute of the round? Novaes lands strikes from top but apparently not enough as the referee stands them up with 10 seconds left of the round. Also a very close round, I give slight advantage to Hezam. The winner of the third takes it all.

Round 3
No strikes thrown the first two minutes as Novaes stalks from the center of the cage. Jonatas lands a kick to the head of Hezam as he moved forward to close the distance. It definitely left the French fighter dazed as he managed to secure the clinch. Now Novaes working from the top after a beautiful throw from the clinch. Once again not enough action from the top in the opinion of the referee as he stands the gladiators up. Hezam gets the top after a fast takedown but gets swept by an aggressive Novaes in the final moments of the fight. Close one this fight, we will see how the judges scored it shortly.

Main Event
Antti Virtanen MMA Imatra, Finland vs Jonathan Svensson, Pancrase Gym Stockholm, Sweden (70.3 KG)
Round 1
Svenssons feints and shoots for a double, he doesn’t get it and is reversed against the cage. Virtanen puts the Swede on his back as he Svensson is looking for a guillotine, he does not get it but stays active in the guard looking for angles and submissions. Antti goes for a pass and Svensson scrambles, it backfires and he ends up standing with the Finn on his back. Antti sneaks in an arm under the chin of Svensson and starts to apply the squeeze, it’s tight and Svensson taps!