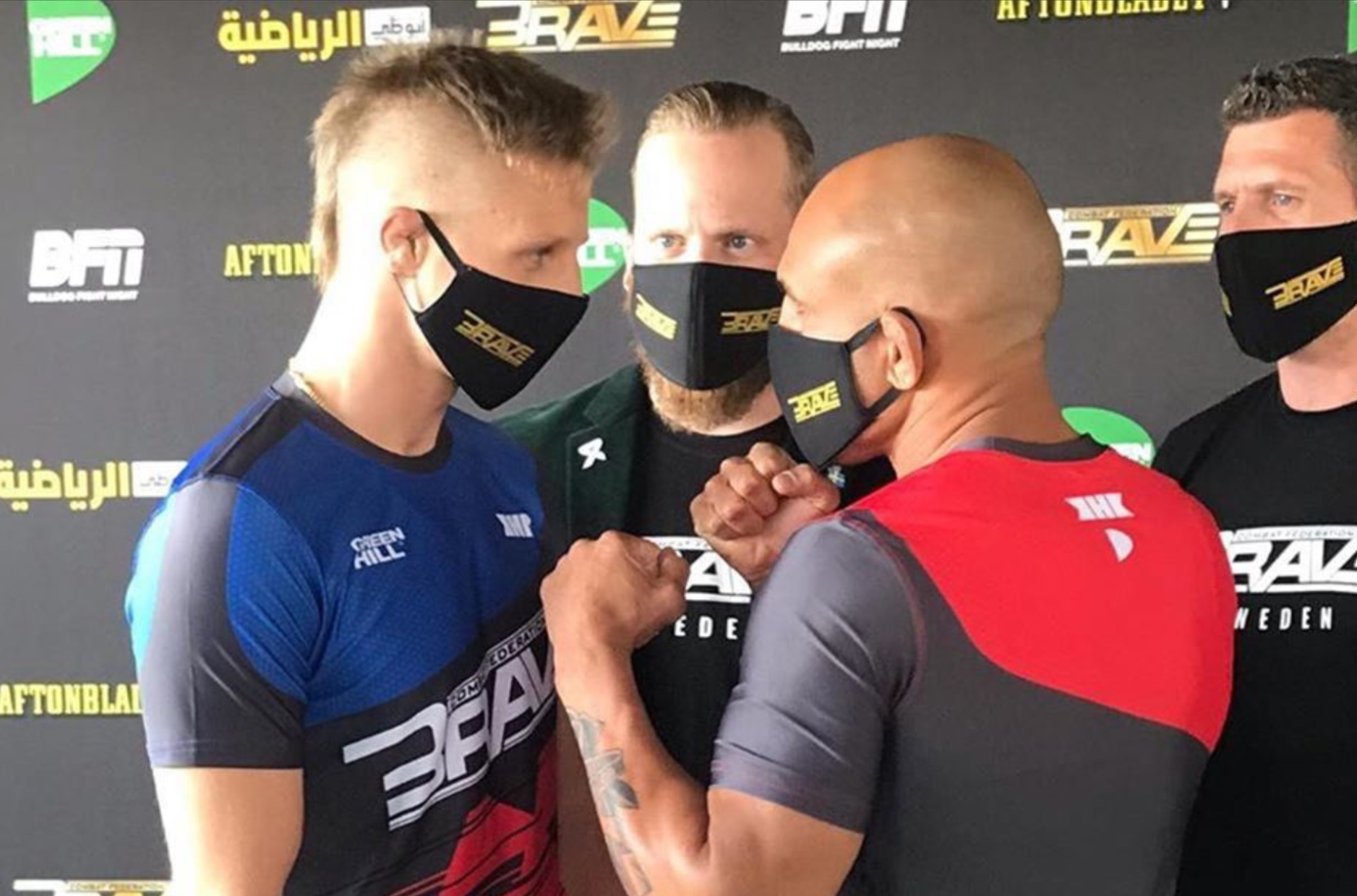 BRAVE CF 39 in association with Bulldog Fight Night goes down today as the last of three events scheduled in Stockholm. In the main event, Greece’s Giannis Bachar (5-2) faces Tahar Hadbi (14-7) from Algeria in the welterweight division. The Nordic action happens in the co-main event where Andreas Gustaffson (5-0) from Sweden faces Miro Jurković (10-2) from Serbia in the middleweight division. Couple other bouts that include Nordic fighters are Sweden’s Tobias Harila (6-1) against Rafael Macedo from Brazil (10-4) at 155lbs. It is worth noting, however, that Macedo has been training at Frontline Academy in Norway for a certain period of time already. Last, but not least, the event will start off with another fight featuring a Nordic fighter, in which Sahil Siraj (4-0) from Sweden goes up against Davide Gregorio (5-3) from Italy, also at 155lbs.

Get the event results here.

Alexander Lindgren defeated Eddie Olsson by submission in round 2 in an amateur bout.

Nikolija Milosevic won by decision over Jessica Andersson in an amateur bout.

Zvonimir Kralj Stopped Samir Sadoun via TKO at 29 seconds into Round 1 in a pro bout.

Sahil Siraj (4-0-0), Sweden vs. Davide Gregorio (5-3-0), Italy – LW
Round 1 – Siraj looking for the right opening for some powerful strikes and Davide throws numerous spinning strikes that doesn’t land. Siraj defends a few takedowns well by getting up to his feet pretty quickly. Sahil lands a good power punch that makes the italian wobble a bit. A takedown for the swede and another good punch but time is up.

Round 2 – A little higher pace in this round. Some nice hard punches from both fighters, Siraj defends another takedown but gets wobbled by a over hand from Davide. Good body kick from the swede again, failed takedown from the Italian and a fast lefthand from Sahil. A nice clean combination comes fast from Sahil but the ending knee doesn’t land so both fighters move on to the final round.

Round 3 – A lot of movement starts the final round of some strikes fly but no damage done on any of the fighters. Well defended takedown attempts from Sahil. The fast punches landed from Sahil has caused some swelling on the face of the opponent, the swede shows a lot confidence landing a clean punch when the chance is there. Siraj reverses a takedown but stands up instead of grappling. A hard left hand from the swede but time runs out.

Felipe Lima (8-1-0), Brazil vs. Farbod Irannejad (8-1-1), Iran – Catchweight (64kg)
Round 1 – Some feeling out each other starts it off, nothing really connects. takedown for Farbod but Lima gets back up. A hard yet unintentional knee from Lima lands in the groin of Farbod who drops to the ground and stays there for some time. The fight continues after awhile. A sharp flying knee from Lima but Farbod shows nothing. big takedown for Farbod and Lima ends up on his back. A nice switch kick from Lima but time ends.

Round 2 – A good dominance on the ground from Lima, Farbod struggles to get awayamd eats a head kick on the way up. Another quick stop due to a cut on the eyebrow of Farbod. The doctor clears it and the fight continues, Lima displays some nice striking skills. Lima putting some good pressure with strikes and lands some nice strikes. Time ends.

Round 3 – Another unfortunate strike lands in the groin of Farbod and hes down again. After some time to recover the fight continues. Some good attempts Lima lands a good clean punch on the chin but not a reaction. Lima reverses a takedown and lands in mount and starts to drop some bombs. Farbod gets out and the fight is up against the cage. Clinch against the cage with Lima putting pressure, Farbod has a tough chin as he eats another clean shot. Headkick from Lima but Farbod just does not go down. Now Lima does some damage, but FArbod survives. The time is up.

Tobias Harila (6-1-0), Sweden vs. Rafael Macedo (10-4-0), Brazil – LW
Round 1 – Both fighters swing right away, Macedo with a good takedown that lands him on top. Harila eats a hard hammer fist to the head but gets up briefly before Macedo takes the fight to the ground again. Macedo rolls over as Harila stands up and Harila lands a few heavy punches that opens Macedo up that is now bleeding. A second taked0wn from MAcedo, Harila is looking some what relaxed on the ground, a weird stand of on the ground ends up in both fighters on their feet and Tobias lets to hard punches go that both connects, a knee that lands on Macedo. A trip takedown from Rafael but time is up.

Round 2 – HArila starts of stalking Macedo cutting of angles and landing some nice strikes. A beautiful front kick from Harila connects who just keeps stalking Macedo in the cage. Takedown from Macedo but both fighters stand up again, now Macedo yet again has the back of Harila. Macedo works hard to take harila down when he takes a few elbows that opens him up again and hes bleeding. Macedo almost runs around the cage for some time when Harila lands 2 good knees and the Stalking continues, a nice sprawl from Harila and a another knee. Time is up again. Before the rest is over Macedos corner throws in the towel making Harila the winner of this bout.

Andreas Gustafsson (5-0-0), Sweden vs. Miro Jurković (10-2-0), Serbia – MW
Round 1 – Takedown from Miro with Gustafsson on is back, Gustafsson has a tight hold locked in around the Serbians neck but nothing comes from it. Gustafsson muscles up and lands a hard shot, now he has the back and picks Miro up throwing the opposition to the ground. Miro has gotten a cut on his head, up against the cage itshard for Miro to escape from gustafsson’s pressure. A good hook from Gustafsson connects, another lefthand lands from Andreas. A shot from Miro ends the round.

Round 2 – Takedown attempt from Miro, jumping kick from Gustafsson and another bad takedown attempt from Miro. Gustafsson goes for a guillotine but its just not there but Miro eats a good strike on the way out, right hook that connects on Miros head. Gustafsson eats a few punches but moves forward and lands a few more himself. Miro is looking really tired after 3 minutes in the 2nd round. Gustafsson has really found his distance with the striking, punishing Miros every takedown attempt. A lot of punches keep landing on Miros face that is showing some swelling. This fight goes into the 3rd round.

Round 3 – Some scrapping to get the final round off, punches fly from both sides testing each other. An easy takedown defended by the Serbian, both guys exchanging punches, hard punches. Both fighters are showing signs of being tired but Gustafsson keeps landing hard punches but Miros keeps going, a lot of devastating strikes flying and MIro is wobbling. Finally the referee calls the fight and steps in stopping it.

Winner by TKO at 4:10 in the 3rd round, Andreas Gustafsson

Giannis Bachar (5-2-0), Greece vs. Tahar Hadbi (14-7-0), Algeria – WW
Round 1 – And the main event is on, Fast hands from Hadbi, Bachar defends a takedown and they move back to the centre of the cage. Movement from both guys looking for openings to land strikes, Bachar rocks Hadbi with a left hook, a knee to the body, an elbow lands as Giannis ups the pressure. More good strikes from Bachar lands as he dictates the movement in the cage, after a slip from Bachar Hadbi starts to take some more initiative and landing some strikes and the time runs out.

Round 2 – Hadbi looks more hungry now and has found his range, Giannis still dictates the movement but Hadbi responds with fast strikes that connects. Leg kicks from Bachar does some nice damage, a big shot from Bachar makes Hadbi bleed from his nose. Nice step in elbow from Tahar, a failed takedown leads him nowhere. Mean elbows from Tahar flies and lands, nice combos from Bachar displaying his Muay Thai background. Big punch from Bachar just before the buzzer sounds out.

Round 3 – Quick exchanges before Tahar tries for another takedown that Bachar defends well, separation and big leg kicks from Giannis. Another takedown defended by Giannis, step in elbow by Tahar, some more pressure from Hadbi but Giannis takes charge again landing some body shots, more elbows from Tahar shows that both guys still is in this fight. Bachar with legkicks and knees but its Hadbi with a takedown, they stand up, more exchanges before Giannis charges for a takedown. A quick adjustment by the referee after a possible fence grabbing. A hard elbow from Tahar Hadbi ends this fight with the buzzer sounding out.