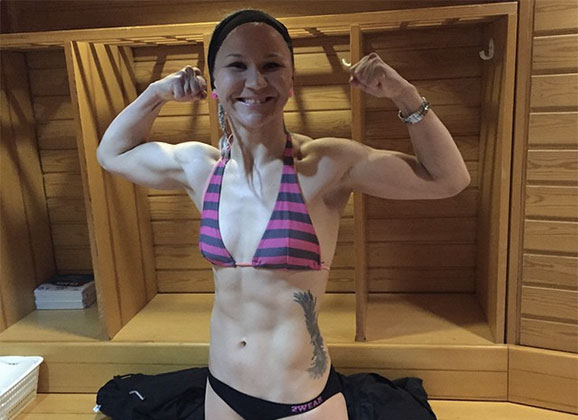 Suvi Salmimies (2-0) will face Isabelle Paren (1-0-0) at tomorrow’s Cage 28 event. The Finn was originally scheduled to be on Saturday’s Superior Challenge card in Stockholm, but after an injury to opponent Lina Eklund she finds herself with a bout on the Cage instead. “My manager Jukka Paananen is a miracle maker” says the MMA UTTI fighter about getting the fight. “I had hope cause I usually automatically try to think positive and I think that things have a way of solving themselves on some way.”

Käytii päivällä kahdelta testipuntarilla 🙂 tunti olis enää viralliseen. We had a little testrun with the weigh-in scale today around 14.00 and now it’s only on hour to the official.

The rock singer out of Kouvola is ready, but doesn’t know much about the fighter from France that has only had one professional MMA bout. “I only know that she has kickboxing background and that’s she’s tough. I always try to focuse more on what I know about myself.”

As for a prediction for the Helsinki event, Salmimies comments “you never know what’s gonna happen. But I will try my best to let nothing surprise me.”