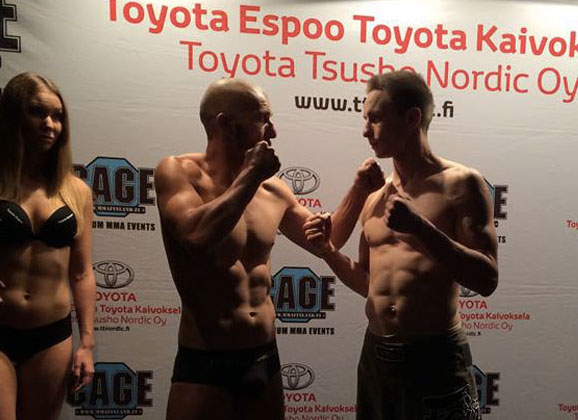 Cage 28 goes down tonight at the Helsinki Hall of Culture with seven pro MMA bouts. The card is headlined with Finn versus Finn clash with Cage title holder Glenn Sparv (9-3) taking on on challenger Johan Vänttinen (12-4-1).

Sparv will attempt to defend his welterweight strap for the first time, after outwrestling Kai Puolakka back in February at Cage 25.  The Finn has won 4 of his last 5 bouts, only dropping a first round stoppage back in December 2013 over Alberto Mina.  The Finn has been training in Thailand for the last couple of years now and recently switched from Team Quest to AKA Thailand with. UFC fighter Mike Swick as his head coach.

“Its a huge fight” says Sparv to MMAViking.com. “Johan is improving all the time, but im improving every day, too. I just need to prove it on Friday.”

Vänttinen who now trains out of Hardknox Helsinki has been on a roll, winning his last three bouts after a disappointing loss at GCE to Nayeb Hezam,. “Hardknocks has improved my training. They have a professional attitude, quality coaching, new sparring partners coming in all the time.” says the challenger to MMAViking.com content partner Fightsport.fi. “He is very strong, very big, cuts a lot of weight…. a tough wrestler.” The 25 year old beat Olli Jaako Uitto at Cage 26, Juho Valamaa at Helsinnki Fight Night, and most recently Vaidas Valancius at Carelia Fight Night 10 in September.

Joni Salovaara (14-7) takes on Vicente Alamo (3-0) from Spain. Salovaara has been training at several gyms. Espoo Kehähait is his home gym in Espoo but also visiting FinnFighters in Turku and Hardknocks in Helsinki. He trains with such fighters as Juha-Pekka Vainikainen, Mikael Silander and visiting fighters such as Niinimäki, Hirvikangas, Kuivanen, and Puolakka. “He is a tough dude who is good on the mat. Has some striking too.” says the Finn about Musare.

Juha-Pekka Vainikainen (22-9-1) makes his return to action against Daguir Imavov (8-1-1).  The Finnish lightweight has also been visiting HardKnocks for sparring with Vänttinen brothers and Jussi Halonen.  “He looks like he wants to stand and trade, but I prefer to keep it standing and blast away.” says Vainikainen about the French opponent.

The leg lock mater Mika Hämäläinen (5-1) is coming off of his first loss that he suffered over Murad Zeinulabidov in June at Fight Night Helsinki.  He recently won by heelhook at the Takakuristus submission only pro grappling.  The Finn will face Alexandros Michailidis.

Suvi Salmimies (2-0) will face Isabelle Pare (1-0) in a bout put together just days ago.  Salmimies was scheduled to fight on Superior Challenge on Saturday, but after this bout was cancelled, she picked up the fight in Helsinki.

Jussi Halonen was set to fight on the card, but broke his foots in a warmup just days ago. So his bout is now off the card.