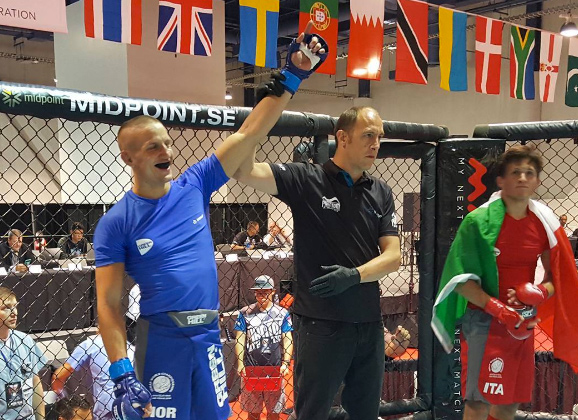 It is Day 2 at the 2016 IMMAF World Championships at UFC International Fight Week, and Nordic vikings were in bouts throughout the day. Sweden won 4 of 6, Finland 2 of 5, Iceland 1 of 1, and Norway 1 of 3. Denmark did not compete today. Get a full recap of the fights here.

205 lbs. Igramudin Ashuraliev (Russia) vs. Bjarni Kristjansson (Iceland)
Kristjansson wins again by submission this time by a rear naked choke at 2:48 in Round 3.

155 lbs. Geir Kåre Cemsoylu (Norway) vs. Francesco Spinola (Italy)
Cemsoylu wins by an arm triangle in the final round at 1:19.

205 lbs. Merrick Bengis (South Africa) vs. Jaakko Honkasalo (Finland)
Jaakko moves on after a win by guillotine at 0:44 in round 3.

170 lbs. Jörgen Indsetviken (Norway) vs. Akonne Wanliss (United Kingdom)
Indsetviken is forced to tap after a second round submission, ending his championship.

155 lbs. Ferdun Osmanov (Bulgaria) vs. Niko Koponen (Finland)
Koponen is forced to see himself defeated by a unanimous decision after going the distance.

205 lbs. Patrick Drescher (Germany) vs. Robin Enontekio (Sweden)
Enontekio is disqualified and there by loses the match.

135 lbs. Daryl Clarke (Ireland) vs. Renato Vidovic (Sweden)
Vidovic loses by submission at 1:59 in round 1.

185 lbs. Rostem Akman (Sweden) vs. Valeri Atanasov (Bulgaria)
Akman scores his second win of the tournament, he wins by a unanimous decision.

135 lbs. Markus Hægland (Norway) vs. Marco Zannetti (Italy)
Markus is defeated by TKO in the last round.

180 lbs. Aaron Kennedy (Northern Ireland) vs. Perparim Salihu (Finland)
Salihu is knocked out by a second round TKO at 2:30.

135 lbs. Abdul Hussein (Finland) vs. Bryan Alexander Pereira Munõz (Colombia)
Hussein wins by armbar in the first round at 2:23.