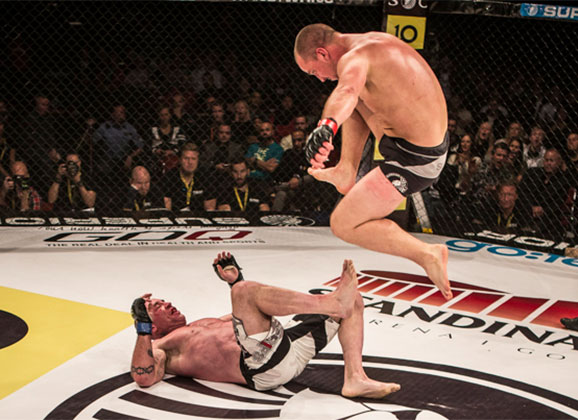 There were several shows in the Nordics in 2013 that had ambition to take local events to the next level. Cage 22 and 23 highlighted many of Finland’s best fighters like Anton Kuivanen, Tom “Stoneface” Niinimäki, Marcus Vänttinen, and Timo-Juhani Hirvikangas selling out arenas, but ultimately it was Sweden’s Superior Challenge 9‘s first event in Gothenburg that took the prize for 2013 Event of the Year.

The Card
Superior Challenge 9 brought back local Olympic star Sami Aziz and versus former UFC champion Jens Pulver in the main event. Scheduled for card was Nordic UFC veterans David Bielkheden, Besam Yousef, Anton Kuivanen, and Simeon Thoresen, and Sengoku/BAMMA/Cage Warriors vet Diego Gonzalez. Bringing together the best fighters outside of the UFC from Finland, Sweden, and Norway was the goal of the November 23rd card, even though the Brazilian Swede and the Grin were forced to pull out due to injury, is a rare treat.  In addition to the established veterans, the promotion also highlighted key up and comers on the local scene, including 2013 prospect of the year Emil Weber Meek and Swedish heavyweight Yosef Ali Mohammad.

The Fights
A strong card is only half of the equation to having a special event of the year card. But, Superior wowed the crowd from the first bout on the card and kept delivering until the final bell.

Within the first 31 seconds of the event, it was Gladius MMA’s Dexter Dyall Wallin that landed a perfectly timed hook to drop Swede Martin Halvorsen face first in the cage. The Nordic event of the year had begun. Michel Ersoy got the Allstar Training Center fans going as the Stockholm based fighter unleashed power punches leading to a stoppage over late replacement Finn Perttu Paatola.

Per Franklin and Emil Meek dazzled the crowd with their rematch. The Norwegian’s growing reputation survived as Meek showed he could give and take a a huge punch. The Trondheim fighter showed his power and athleticism in using punches to down the game Franklin who also able to comeback and rock Meek in the first round. The crowd got their money’s worth in this battle ending with the Hulk stopping the bout in the second and getting his hand raised again.

Merely seconds into the fight it was the grappler Yosef Ali Mohammad that showed his power KO’ing Duarte Fonseca in brutal fashion. Matti Mäkelä versus Matteo Minonzio had an anticipated showdown after the weigh-ins showed the two going face-to-face, but it was Mäkelä who shined in highlight fashion with a finish that had the crowd in awe.

The veteran showdown between Anton Kuivanen and Diego Gonzalez also proved to be an exciting one, where the Finn stopped Gonzalez with punches early in the first round.

Late replacement Danny Mitchell spoiled the plans for a win from local UFC veteran in Besam Yousef, by submitting the Gladius fighter in the second round.  The high-profile win for Mitchell got him a ticket to a UFC contract shortly after.

Sami Aziz put on a perfect performance against American Jens ”Little Evil” Pulver in the final bout. Showing a flash of new skills. Aziz gave the fans what they wanted, showing striking and wrestling, delivering on a big win for all the locals that came to see the Olympic wrestler retire in style.

From top to bottom, this event delivered. Even the former face of Superior Challenge, Reza Madadi, made an appearance challenging Anton Kuivanen in the cage after the Finn beat Mad Dog’s teammate Diego Gonzalez.

The previous winner of the event of the year was Fight Festival 31.