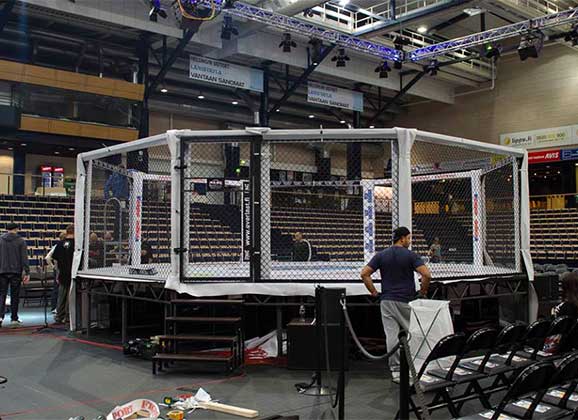 Cage 23 takes place tonight at the Energia arena in Vantaa, Finland. The card is stacked with Finland’s finest and international talent. Cage 23 has amazing four title fights on the card as featherweight, lightweight, welterweight and lightheavyweight belts are up for grabs tonight.

Unfortunately there won’t be any live streams available so you have to settle for the next best thing: MMA Viking’s live play-by-play (scroll down and update)

Take a look at MMA Viking’s extensive Cage 23 preview package if you missed it.

R1: Ahmala connects with a left and attacks a flurry of strikes but gets tripped to the ground by Nurminen who quickly progresses to mount. Nurminen pushes Ahmala against the cage wall on the ground. Ahmala goes for a heel hook, Nurminen defends calmly but gets swept in the progress. Ahmala on Nurminen’s back. Fighters get back to their feet. Ahmala throws another flurry and shoots for a takedown. Nurminen tries to apply a guillotine choke that is not there. Ahmala in Nurminen’s deep triangle but scrambles out of it and on to Nurminen’s back. Scramble and Nurminen on top now in side mount. Weird double inverted triangle position. Nurminen throws a hard shot from Ahmala’s open guard as the round ends. Awesome round to kickstart the night!

R2: Ahmala connects with a spinning back kick to body. Nurminen scores a takedown from thai clinch and moves to side mount. Nurminen goes for a mount but Ahmala bridges and sweeps him. Ahmala throws leather from Nurminen’s back with no hooks in. Ahmala tries to apply a kimura but Nurminen slips out of it and gets top. Ahmala turns the table again by bridging. Ahmala with short punches from Nurminen’s closed guard. Fighters back to on their feet for a second. Ahmala with a trip takedown. Both fighters throwing short punches on the ground with Ahmala on top. Nurminen scrambles on top of Ahmala and throws a flurry as the bell rings! Close fight.

R1: Page opens with two snapping inside leg kicks. Feeling out period on the feet with both fainting. Lähdemäki tries to catch a leg but gets punched in the face for the effort. Page connects partly with a head kick. Lähdemäki rushes forward and puts Page against the fence. Lähdemäki with double underhooks and tries a couple of body lock takedowns but Page defends well with good hip movement. Fighters turning each other against the wall. Ref separates them. Page moves forward with punches but Lähdemäki stands her ground and throws back strikes of her own.

R2: Page with another inside leg kick, Lähdemäki  answers with a right hand. Brief moment in the clinch and the Finn finally gets the takedown she was after. Lähdemäki quickly mounts Page who looks inferior on the ground. Lähdemäki throws punches from mount and makes Page turn on her stomach. Lähdemäki working on a RNC from the back mount. Choke is not there so the Finn continues with punches to the head. Page tries to bridge few times but Lähdemäki easily maintains mount and throws punches. Page suddenly sweeps Lähdemäki by bridging but gets into trouble again as Lähdemäki snatches her arm to an armbar. Lähdemäki turns on her stomach with Page’s arm locked up tight and makes the French tap out.

R1: Clinch fighting on the feet. Nyyssönen with a trip takedown but gets reversed instantly by Khataev. Nyyssönen spins for a heel hook but Khataev defends and starts to throw hard leather. Fighters get back on their feet. Khataev with a hip throw. Khataev throws few punches from top but let’s Nyyssönen up. Khataev connects with a punch and throws Nyyssönen to the ground from thai clinch. Khataev goes for a throw on the feet but ends up on the bottom. Fighters scramble back on their feet. Khataev connects with a hard right hand and follows with couple of knees to the face of Nyyssönen. Great round!

R2: Nyyssönen shoots, Khataev sprawls out of it. Clinch fighting against the fence. Nyyssönen changes level and takes Khataev down. Nyyssönen quickly takes Khataev’s back and chokes him out with a rear naked choke! Awesome comeback from the young kid.

R1: Sköld opens with a nice leg kick. After a flurry of strikes fighters clinch. Hämäläinen sends Sköld flying with a beautiful greco arm throw the clinch. Sköld scramble on top, Hämäläinen spins for a heel hook. Sub is not there but the Finn gets top position. Hämäläinen in Sköld’s guard. Hämäläinen drops down for another heel hook. This time it’s tight. Sköld grimaces in pain and has to tap.

R1: Perras connects with a hard right hand that buckles Halonen’s knees. The Finn pushes for a clinch and presses Perras against the cage wall. Perras shoots for a takedown but gets his head stuck in Halonen’s guillotine. Halonen squeezes hard but Frenchman hangs on. Brutal clinch fighting with both guys throwing wild punches and stiff knees. Perras lands couple of knees from thai plum. Halonen connects with a hard left hook. Perras stumbles to the ground with Halonen on his back. Two left hands land for Halonen on the feet. Wild striking exchanges on the feet. Fast pace is beginning to show on fighters. Halonen lands another hard left hook and Perras is in trouble but survives. Halonen drops for a guillotine from clinch, doesnt get it and Perras gets top position as the round ends. Damn good round!

R2: Clinch fighting after a short striking exchange. Perras shoots and his head is again stuck in Halonen’s guillotine attempt but the Finn still unable to secure it. Halonen goes for a kimura and it looks horrible as Perras’ arm bends. Perras guts it out and stays on top. Both fighters looking tired by now. Perras with short punches from Halonen’s closed guard. Perras lands two hard upper cuts as they get back on their feet. Perras with knees to the legs from the clinch. Halonen looks gassed and gets taken down. Perras in side mount punishing Halonen with short punches. Back to the feet. Halonen goes for a head kick but slips to the ground.

Winner: Hirvikangas by heelhook R1 1.42 (official ruling was heel hook but it looked more like a kneebar imo)

R1: Short striking exchange on the feet with not much landing. Valamaa rushes forward and they clinch against the fence. Baranauskas tries to throw Valamaa but the Finn blocks it and spins to Baranauskas back. Lithuanian tries to scramble out of bad position but gets caught with Valamaa’s perfectly applied rear naked choke. Baranauskas has no choice but to tap out.

R1: Solid leg kicks from Puolakka.  Puolakka’s stiff right hand connects. Mestre answers with a hard low kick. Puolakka pushes forward with strikes and lands a couple. Mestre ducks down, shoots and gets a takedown. Mestre working to pass Puolakka’s guard but unable to do so. Puolakka scrambles back to his feet. In the clinch Mestre’s knee hits Puolakka’s groin and crowd goes “uuuuuugh”. Puolakka attacks again with a flurry of strikes and Mestre answers with a shoot. Clinch fighting against the fence. Puolakka’s 1-2 connects partly. More grueling clinch fighting with Mestre pushing for a takedown but unable to secure it. Puolakka lands two hard knees in the clinch. Puolakka attacks with strikes as the bell goes off.

R2: Mestre clinches right off the bat and takes knees from Puolakka to the body. Mestre pressing Puolakka against the fence. Mestre drops down for a takedown but doesn’t land it. Mestre explodes forward with a shoot but Puolakka’s sprawl is top notch. Puolakka on top in side mount. Mestre turns on his side and goes for a single leg. Back to the feet. Puolakka connects with punches and knees. Mestre shooting in desperation  mode now. Mestre in turtle position with Puolakka on top throwing strikes. Mestre looks tired but still hanging tough. Puolakka takes Mestre’s back, sinks in a rear naked choke and squeezes hard. Mestre tries to gut it out but eventually has to tap.

R3: Single shots thrown by both fighters on the feet. Christensen with a low kick. Vänttinen pushes for a clinch again and continues with already familiar pattern of knees to the legs and short body punches. Endless clinch fighting. Ref calls for action but nothing emerges from it. Vänttinen eats an uppercut from Christensen. And surprisingly action goes back to clinch and stays there until final bell.

R1: The crowd showing their love for “Stoneface”. Feeling out period on the feet with both fainting and jabing. Niinimäki connects with a jab. Niinimäki drives forward with a shoot and gets a takedown. Walel working on rubber guard and controlling Niinimäki’s posture. The Finn passes to half guard. Walel tries to work his way to the feet but Niinimäki puts his weight on him and lands few cracking punches. Niinimäki punishing Walel from his back. Walel gets back to his feet and they clinch. Niinimäki takes him down with a single leg. Niinimäki in sidemount and drops down a short elbow. Niinimäki with a knee to the body. Walel regains half guard and then turns to his knees and works his way back up. A bit of clinch fighting as the round ends.

R1: Kuivanen gets a huge response from the home crowd. After a short feeling out period Reynolds lands a left hook that sends Kuivanen crashing down to the floor. The Finn tries to recover but another shot from Reynolds flattens him out and the ref dives in.