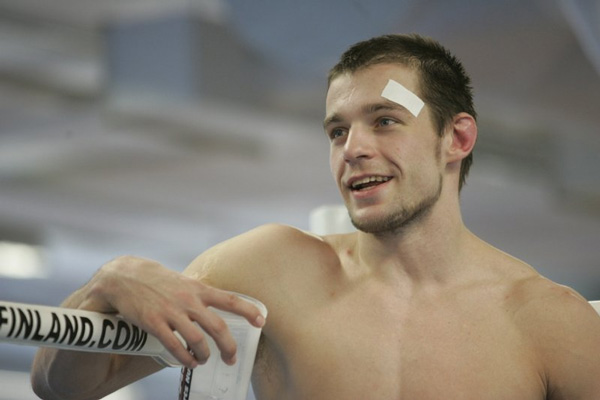 MMAViking sat down with the UFC lightweight Anton Kuivanen (16-4) who just few weeks ago signed the long awaited deal with the biggest promotion in the world. Finnish powerhouse will make his Octagon debut in less than two weeks when he fights American Justin Salas on the 15th of Feb at the UFC on Fuel TV show in Omaha, Nebraska. In this first part of the detailed interview Kuivanen shares his thoughts on getting signed with the UFC and how it has affected his life so far.

MMAViking: Tell us a little about how you felt and what was going through your head when the UFC finally offered you the contract?

Anton: Yeah the feeling was quite good (laughs). We worked long and really hard to achieve this goal. I mean we had been aiming for it for a long time. Three years ago I and my coach Sammy Hämäläinen set a goal that we would make it to the UFC in two years. Well it actually took three years but now here we are. It’s a dream come true. Of course it felt amazing for a while but quickly our minds shifted from celebration to focus on the challenge ahead.  Now it’s really time to get down to work and establish my position in the UFC lightweight division.

MMAViking: Where you surprised by the timing of the offer?

Anton: Maybe a little since the first fight comes on just six weeks’ notice and it’s in the US. We thought that there was a good chance that I would get a spot on the UFC Sweden card so we were kind of aiming for that. The offer itself wasn’t a surprise to me. I felt confident that I had enough good wins and that I had already showed that I’m on the level that is demanded in the UFC.

MMAViking: How has the UFC deal affected your life so far?

Anton: Well, I’ve been busier than before with all sorts of PR work.  I’ve done a bunch of interviews for TV, radio and newspapers. And then there’s the paper work regarding the contract, getting the work permit to the US and so on. I also had to go through an extensive medical check-up including MRI studies to meet the requirements set by the UFC.

After the deal was reached, I sat down with my coach Sammy and we came up with a training plan for the weeks leading up to the fight. Most of the training that we do now is directly related to fighting while supportive training like strength training is reduced.  Naturally the intensity of my training has gone up a lot too.

MMAViking: You said that you’ve done a lot of interviews with the local media. What kind of attitude they have had towards you and MMA?

Anton:  I would say that in general Finnish media has had an open and curious attitude. The level of knowledge of course varies between reporters but they have all appeared to be genuinely interested in me and MMA.  Overall I have positive feeling about the publicity my UFC deal has gotten in Finland.

MMAViking: Recently Marcus Vänttinen landed a deal with Bellator and now you with the UFC. Do you believe other signings of Finns will follow?

Anton:  Yeah I believe so but of course it’s up to us Finns too. I think that these signings will give confidence to many Finnish up-n-comers who are close reaching the international level. There are few Finnish guys that are close to getting signed. First one that comes to mind is Tom Niinimäki who should’ve gotten the deal already.  JP Vainikainen is in really good shape and Niko Puhakka has a great record. Musa Amagov from our gym plans to fight ten times in 2012 and work his way to the top. But it’s also good to remember that MMA is growing fast all over the world and there are tons of guys trying to make it in MMA.

MMAViking: Anyone you would like to thank or give a shout out to?

Anton: First I have to thank my sponsors who have decided to support me at this point. They have a significant role in this whole thing. With their support I can focus on trying to reach my full potential and develop as a fighter. And of course big thanks to all of the fans, my team and training partners and to everyone who is working to build up MMA in Finland. Check out my new website at AntonKuivanen.fi and my UFC debut on Facebook!

This is the first part of interview. In the second part we’ll find out more about Kuivanen’s thoughts on his upcoming UFC debut. In the third and final part Kuivanen will answer the questions from the fans. Stay tuned for more!