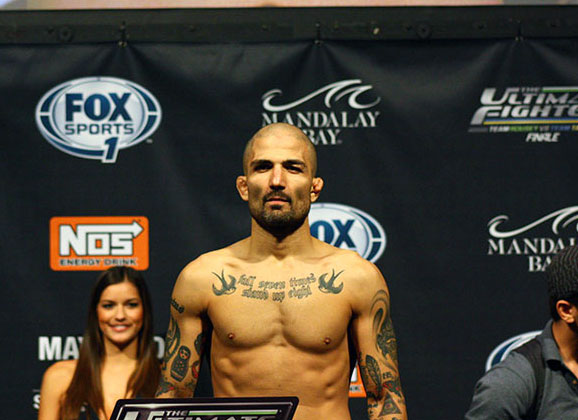 Akira Corassani (12-4) has been excited about his big return to Sweden, but unfortunate news about his October 4th co-headliner in Stockholm might render him idle at least for now.

The Renzo Gracie Jiu-Jitsu fighter was left without an opponent after Chan Sung-Jung pulled out of their scheduled bout at UFC Fight Night Stockholm. The ‘Korean Zombie’ cited an aggravation of the shoulder injury he suffered when he challenged Jose Aldo for the UFC bantamweight championship at UFC 163 as the cause of the withdrawal.

“Yes, unfortunately, [Jung] strained the shoulder that he dislocated in the Aldo fight,” Jung’s manager Brian Rhee said. “No structural damage, he just has to do rehab for four weeks, then the doctors will re-evaluate.”

The fight was supposed to be the long-awaited return of the Korean fan favorite after a year-long layoff and Corasaani’s second outing in a span of four months. The 31-year-old Gothenburg, Sweden native lost an exciting one against Dustin Poirier.   He had previously recorded three consecutive victories before that.

Time will tell what happens next for Corassani with just over a month before the bout.

UFC Fight Night Stockholm (UFC Fight Nght 53) will be held at the Ericsson Globe Arena at the country’s capital and will feature Iceland’s Gunnar Nelson versus Rick Story for the main event.