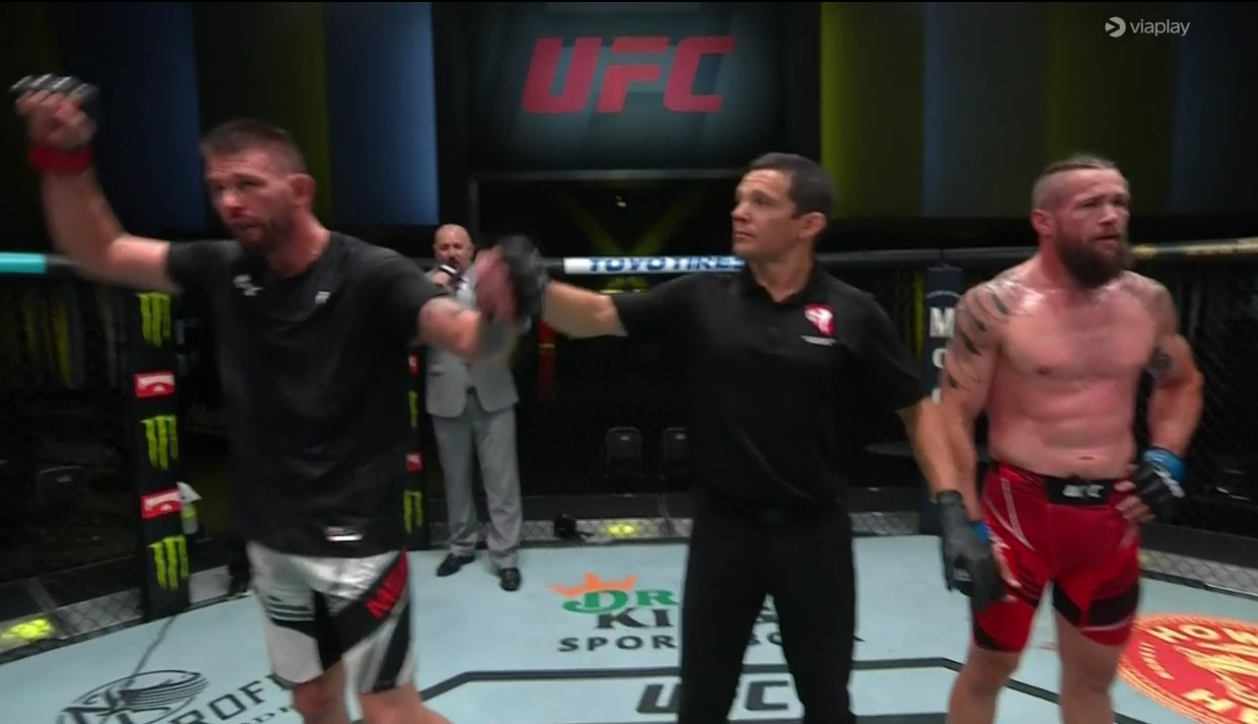 Nicolas Dalby (19-4-1) lost to Tim Means (32-12-1) at the UFC Apex in Las Vegas.  It was a close bout with 15 minutes of action with both fighters having their moments, but with the first two rounds going to the American, the strong round three from Dalby was not enough. Means lands a good headkick to start the fight, and “Danish Dynamite” starts throwing big huge combinations to try and end the bout. The two go into a tie-up and Tim lands a lateral drop, putting Dalby on his back. Two minutes in and the Dane trying to get up against the fence, but Means happy just controlling the action here.

120 seconds and Nicolas is on the feet.  Means a southpaw, and the two end up in the clinch again.  Dalby is cut, and looks to be having a challenge gaging distance.  Big straight hand from the American and Dalby hits the mat, but quickly to his feet.  Dalby in a a double-leg take-down at the end of the round, but defended.

Dalby comes out with urgency and tries to snatch a single leg, then switches to punches and lands a good right!  but, a solid left hand from Means, and the two tie-up again.  The two exchange kicks.  Two left hands from means, and a left had kick from Means, but Dalby marches forward refusing to stop moving forward.  Means defends a good tke-down attempt.  Two minutes left and a nice left head-kick from Dalby, and following-up with punches.  The damage so far from the Dane right there.

Left kick from means that follows-up with some elbows.  Means kicks out the inside leg, and Dalby drops enough for Means to get on top.  In side control now, and stays there for the remaining of the round.

Dalby comes out firing!  Counter left right hand, and a kick.  Dalby crumbles Means with a straight right hand!  To the body lock 30 seconds in.  Means looks to recover from that flurry.  tim pushes Dalby against the cage, and in on the legs, but Dalby defends.  Both in the clinch here, just battling for position.  Dalby landing punches during the break, and the Dane is quicker and has power.  But, needs a finish after losing the first two rounds.  One minute left, Dalby able to land some shots at the end and Means again looks hurt, but won’t be finished within the 15 minutes.  Solid performance from both fighters.

All judges see it in favor for Means 29-28 for the unanimous decision.