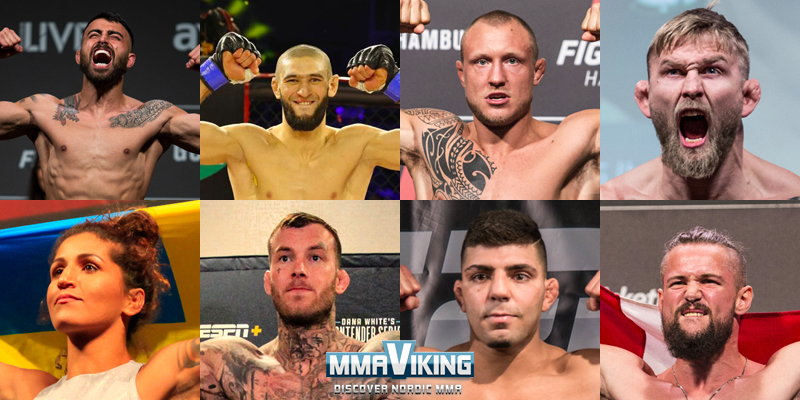 The highly-anticipated “Fight Island” events kick off today starting with the stacked UFC 251, followed by three more events filled with Nordic fighters.  Get your preview of the 8 Scandinaviant fighter matchups here!

Makwan Amirkhani (15-4) returns to action for the first time since his TKO loss to Shane Burgos in November when he faces Scotland’s Danny Henry (12-3) at UFC 251. Henry isn’t a newcomer to the promotion by any means as he holds wins over Daniel Teymur and Hakeem Dawodu. However, “Mr. Finland” is in top shape and confident of returning to the win column.

Unbeaten Swedish welterweight Khamzat Chimaev (6-0) makes his UFC debut when he steps in on short notice to face Welsh brawler John Phillips (22-9) in a middleweight bout. Chimaev has finishes in all six of his wins and it would be a very impressive debut if he could finish the durable Phillips who is known for his knockout power.

Kenneth Bergh (8-0-0, 1 NC) is also set to make his UFC debut as the the Norwegian light heavyweight was originally set to face Germany’s Timo Feucht (8-1). However, there appears to be a change in plans with more information expected soon.

Jack Hermansson (20-5) will be aiming to return to the win column and arguably earn one of the biggest victories of his career against former title challenger Kelvin Gastelum (16-5-1). The Swede seems to have learned from his mistakes against Jared Cannonier back in September as he plans on being unpredictable against Gastelum. Victory would put him right back into middleweight title contention.

Amir Albazi (12-1) is another Nordic fighter who will be making his UFC debut this month. The Swedish-raised flyweight meets fellow promotional debutant Malcolm Gordon (12-3) and will be looking to get his UFC career off to a winning start.

Alexander Gustafsson (18-7) makes his return to action in a highly-anticipated heavyweight debut against Fabricio Werdum (23-9-1). “The Mauler” is on a two-fight losing streak, but can snap it and make a huge impression in his new division with an impressive victory over the former UFC heavyweight champion. Gustafsson is confident based on Werdum’s last outing.

Nicolas Dalby (17-3-1-1) will look to make it two for two since his return to the UFC. Originally scheduled to face Danny Roberts, the Dane will now face short-notice opponent Jesse Ronson. Ronson is a veteran who was previously with the UFC, but Dalby should fancy his chances.

Sweden-raised Pannie Kianzad (12-5) has the opportunity to go on a winning streak for the first time in her UFC career. Coming off a unanimous decision victory over Jessica-Rose Clark, Kianzad can make it two in a row against Brazil’s Bethe Correia (11-4-1) who is coming off a win over Sijara Eubanks.