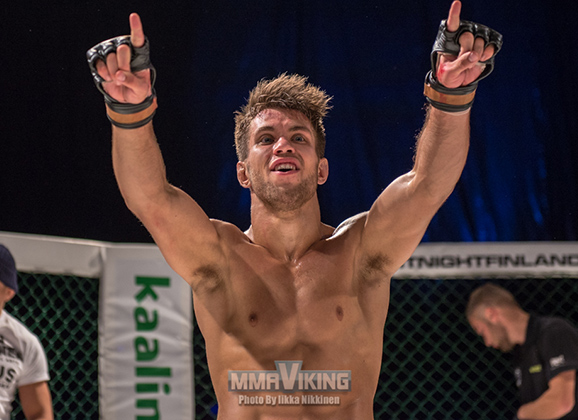 Finns Aleksi Toivonen (1-0) and Harri Määttä (2-0) will square off in a 59 kg bout on November 14th at FNF 11 Karkkila Fight Night putting together two up-and-coming undefeated fighters.  The promotion informed mmaViking.com of the initial bouts on the card today.

Määttä will be returning after a two year absence, as he last fought at Cage 21 in February 2013.  Toivonen made his professional debut at FNF 10, where the BJJ star representing Primus Fight Team locked in an armbar against Petr Pomortsev for the win..

Aleksi Lukkarinen (Primus Fight Team) will make his debut as pro against Atte Ala-Kortesniemi,who will also make his pro debut. Ala-Kortesniemi was earlier set against Patrik Kapanen, who was injured in last FNF event. The fighters have already battled once as amateurs where Lukkarinen won by RNC. This will be a catchweight at 75 kg.