Although there are not any Nordic fighters on the UFC 128 card, MMA Viking brings you an exclusive interview with the Norwegian Fred the Chef who is helping main card fighters Brendan Schaub and Nate Marquardt for main card match-ups with the legendary Mirko Filipović and late replacement Dan Miller.  MMA’s Ultimate Diet Consultant & Private Chef gives us an inside look into the life of a cook to the rich and famous.

This renaissance man has come a long way from his roots in Hamar, Norway, to his gig cooking in Denver, Colorado for MMA’s elite fighter. Fred has turned his passion for food into a high-profile profession, cooking for 50 Cent, Common, Afrika Bambaataa, Grandmaster Flash, and De La Soul to name a few artists, plus Norwegian politicians, CEOs, and even weddings. In addition to cooking for well known hip hop artists for over 10 years, he is a reputable DJ himself.  Below you can listen to an intro by Crazy Legs from Rock Steady Crew and Afrika Bambaataa –DJ Noize did the beat and the cuts on this Fred The Chef Theme:

With a passion for MMA, Fred has ties that go way back in the Nordic fight game. Fred reflects, “I was the official EVT (European Vale Tudo) Disc Jockey. Marko Ervasti, August Wallen, and Otto Knudsen were behind this first cage fighting tournament in Sweden.” 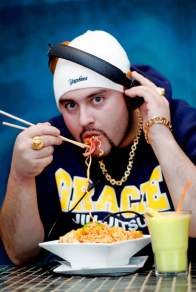 “My highlight there was when all 4 of my fellow Norwegian’s won at EVT Hazard. My good friend Thomas ‘Moon Lee’ Hytten, Ståle Nyang, John Oskar Hammer and Kick ass Tor Olav Hauge all won their fights.” Fred says from this 2004 event in Solnahallen, Stockholm Sweden. At EVT Inferno, in the same year, the DJ also fondly remembers arranging a half time show alongside being the DJ, with Danish rappers Clemens, Tjes Boogie & Street Mass.

Fred’s daughter now trains at High Altitude Martial Arts in Aurora, Colorado.  The gym is run by Nate Marquardt with Paul Fatta, Allen Schecht & Cody Donovan running an excellent BJJ program for kids and adults.  “It was world’s greatest Rita (Allen Schecht’s wife) at High Altitude Martial Arts that introduced me to Nate last year.” says the proud dad.  The chef also wanted to let everyone know that Cody Donovan will also be fighting at Bellator on Saturday, so be sure to look out for the fighter.

Fred first cooked at UFC 122 in Dusseldorf, Germany for fighters Nate Marquardt and Bang Ludwig, and coaches Trevor Wittman and Leister Bowling.  While the chef doesn’t have any specific specialties, he meets with fighters to understand their goals and customizes meals to help them achieve them.  The focus now is “cooking healthy, natural foods.”

“My job is the best cause I get to meet interesting people and share my cooking knowledge. I also get to help people with custom diets so they can perform at their best.” says the main looking to give his Colorado fighters the best chance at this weekend’s card highlighted by Jon “Bones” Jones versus Mauricio “Shogun” Rua.

Fred will be traveling with the two fighters to UFC 128 in New Jersey as he prepares food for Schaub and Marquardt, who look to make their run to the titles.  We wish both fighters luck!

If you are interested in learning more about Fred the Chef’s services, please visit http://visualcv.com/fredthechef or contact directly at fredthechef {at} gmail.com.