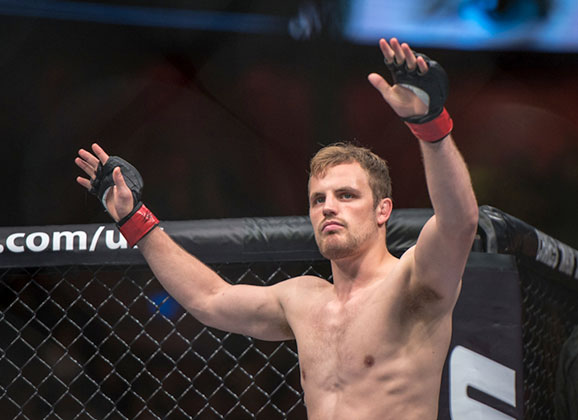 Gunnar Nelson (13-1-1) will face John Hathaway (17-2) at UFC 189. As previously reported by MMAViking.com, father and manager of Gunnar, Halli Nelson, said they were targeting the Las Vegas card taking place during the International Fight Week.

The card on July 11 will be one of the biggest events of the year, as is headlined by a featherweight title bout between the current champion Jose Aldo and Nelson teammate Conor McGregor.

The Mjölnir/ SBGi fighter hasn’t fought since headlining the UFC in Stockholm card in October, which he lost to American Rick Story in a split decision five round battle. “Gunni” started 2014 with two impressive wins in the Octagon, the first was a fight-ending guillotine in the opening frame against Omari Akhmedov in London this past March. The 26 year old then followed up with a rear-naked choke in Dublin over American Zak Cummings in July to the Dublin fans delight.

The fighter out of Reykjavík was set on taking time off to be with his family and keep training after the hectic 2014 schedule. Without any immediate booking this year from the UFC, the healthy Icelandic fighter is now setting his sights on


Nelson will now have his first bout in North America and looks to move up in the UFC rankings, as he currently sits at number 15th.

Hathaway comes in with an impressive record, and has won his last three of four in the Octagon. The London Shootfighters athlete has been out of action since March of 2014. The “Hitman” lost in spectacular fashion in his last outing, getting KO’d by a spinning backfist by Dong Hyun Kim.