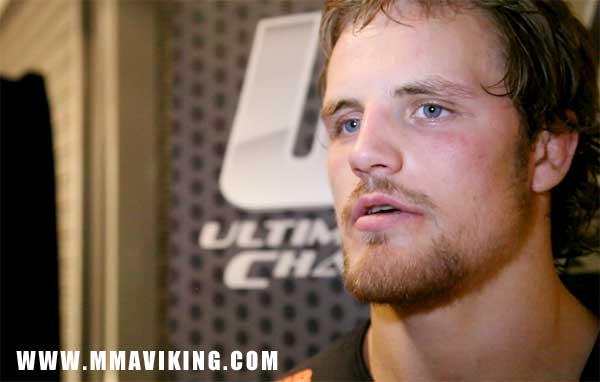 Several sources have reported that Icelandic star Gunnar Nelson will be making a return to the Octagon on October 26th against Canadian Jordan Mein in Manchester, however Nelson’s camp says “no fight has been decided”.

As previously reported, Nelson injured his knee prior to his scheduled bout with Mike Pyle at UFC 160.  The welterweight has not fought since his bout in February against Jorge Santiago, where “Gunni” won by decision to drive his overall record to an undefeated 11 wins and 1 draw, and a 2 win and 0 loss record in the UFC.  He previously beat DaMarques Johnson in his Octagon debut.

“Gunnar is about to start his training now after his surgery.” says Nelson’s manager Haraldur Nelson to MMAViking.com, who confirm that this bout is not a done deal. “No fight has been decided yet.”

Nelson ‘s rumored opponent is top prospect in Jordan Mein, who is younger than Mjolnir fighter at only 23.  Mein grabbed attention of the UFC fans by his dominant performance over Dan Miller in March, where he stopped the American wrestler in impressive fashion.  He has won his last 9 of 11 fights, and has an overall record of 27 wins and 9 losses. In his last bout, Mein lost to Matt Brown in a short notice fight.  The Canadian has notable wins over Forrest Petz, Josh Burkman, and Marius Zaromskis.  He trains out of Canadian Martial Arts Center, and nicknamed “Young Gun”.

The matchup on the UFC Fight Night: Bisping vs. Munoz card between Nelson and Mein would be an odd pairing, since the UFC typically matches fighters coming off wins and losses together.

All of Nelson’s UFC bouts have been in the UK, so a return to the October UK card would be ideal for the promotion. Time will tell if Nelson’s knee would be ready for a bout. “He has been recovering over the summer.” says Nelson about his son’s status. MMAViking.com will post more information as it becomes available.